Who Funds Their Convention Circuit by Begging for Other People's Dimes? (Rant Warning) 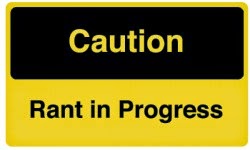 Earlier today +Vincent Florio and I had a conversation about folks basically asking for handouts so they can go to Gen Con or whatever con. We both agreed that this shit pisses us off.

I can afford one con a year that includes travel and hotel stay. One.

If I couldn't afford to go to NTRPG Con I simply wouldn't go.

Imagine that. Can't afford something that isn't a necessity in your life, you just don't get to do it.

Instead, there are folks that want others to pay for their frills. This isn't living expenses. It's not Nystul who can barely keep a roof above his head and is probably Ramen Noodles biggest non-college student customer. This isn't someone down on his luck, with medical bills or the like kicking their ass. It's not the vet bill from hell to keep a beloved pet alive.

No, it's folks like you and me - but they want you and me to pay for them to go on a vacation that we aren't going to because it doesn't fit our budget. We can't afford it either, so why should I give money so some other ass can go?

It takes fucking balls. And a certain lack of self respect.

If you want to go that badly, save your pennies or work a second job. Because my job is not going to pay for your fucking vacation.