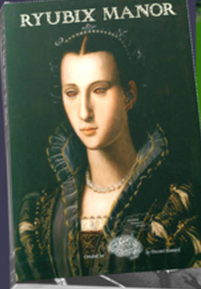 I'll be the first to say it. "Ryubix Manor--Madness, Betrayal, Murder, Vengeance... Family" has anawkward title. It does not flow off the tongue like Rappan Athuk and the like.  That being said, it IS different than the rest.

It's a manor - an above ground dungeon, if you will, which means it has different assumptions than the usual dungeon. It is certainly atmospheric and well done in that respect (I was allowed a peek at an early edit version).

This is not Stonehell, which you can pretty much grab and run without much preparation. With Ryubix Manor, being well prepared will be necessary to effectively run the adventure. All the tools, plots and personalities are given to you, but you will need to spend some time to be conversant with all of them. Your players will thank you (and you will find that things go much more smoothly that way).

Ryubix Manor is OSR generic, not really keyed to a specific "old school" ruleset but useable with any you choose with little work.

If there is one thing that might hold folks back is that it is written for high level play - 16-20 is the default level range for the adventure. Could you tone it down for lower level parties? Definitely, and there are some thoughts on how to do so in the FAQ section on the Kickstarter. Would it be helpful to have more substantial advice for those DMs that might need a little hand holding in the conversion? Probably. High level adventures are often aiming at a smaller market, as the number or parties that reach such levels are much fewer than the parties that are constantly starting out. It's not just the PCs that have to reach the higher levels - the campaign has to survive to those levels too.

It is a nice "haunted house" styled adventure, with lots of keyed rooms (over 300) to explore. It's also less "hack and slash" than many of the current larger dungeons I've looked at. Both are huge selling points to me.

It really does make for a nice change of pace, it's just a shame it defaults to levels my PCs have reached only once since the early 80s ;)
Posted by Tenkar at 9:21 PM