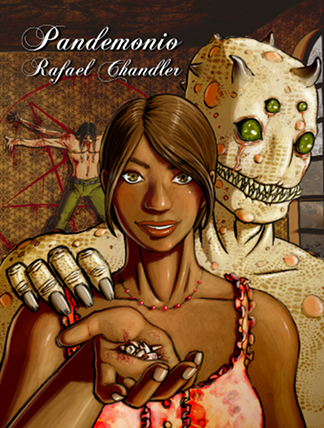 I really wish +Rafael Chandler had given me the heads up that Pandemonio was releasing, but no, I had to stumble across it myself ;)

THE LAST WAR HAS BEGUN

The world needs a hero. Unfortunately, there aren't any, so what the hell, you might as well give it a try.

You're a Disciple, a supernatural warrior on the front lines. Wielding bizarre magics like Sexpletive, Death Panel, Photobomb, and Gunfetti, you must hunt down the diabolical and divine, rescue innocent civilians, and maintain a grip on the tattered vestiges of your humanity. How far will you go to destroy your enemy? Will you resort to cannibalism? Are you certain? Listen, don't knock it until you've tried it.

Pandemonio combines both rulesets and settings into a fast-paced game of splatterpunk action set in a world of violence and decay. You'll need several 12-sided dice and a mind full of nailbombs, scaphism, and hollow-point bullets.

"If you love gorehound transgression at its most base, this is the game for you. You will be vomiting needles ten pages in." (Jason Morningstar)

"This is an independent-publishing triumph." (Ron Edwards)

"I bought the game and devoured it immediately. Excellent writing, flowing with ideas, and worth every penny I spent on it." (Jason L. Blair)

"One of the best traditional RPGs I've seen. It's rock solid entertainment with rules that are easy to grasp, cool to play with, and make play fun." (Matthijs Holter)

"The game is something of a primal scream of rage against the kind of God that burns Sodom and kills the first born of Egypt. And the expressions of that rage are the PCs, armed to the teeth with machine guns, kill-mobiles and the ability to go nova when they need to." (Steve Darlington)

"Damn near perfect for a lot of folk who want to play horror games involving humans with supernatural gifts, especially if they're focusing more on the monster takedown." (Christopher W. Richeson)

"The book's a riot to read—Rafael Chandler is the kind of writer that the RPG field sees maybe a couple of times a generation." (Stew Wilson)
Posted by Tenkar at 12:17 AM

Email ThisBlogThis!Share to TwitterShare to FacebookShare to Pinterest
Labels: PWYW