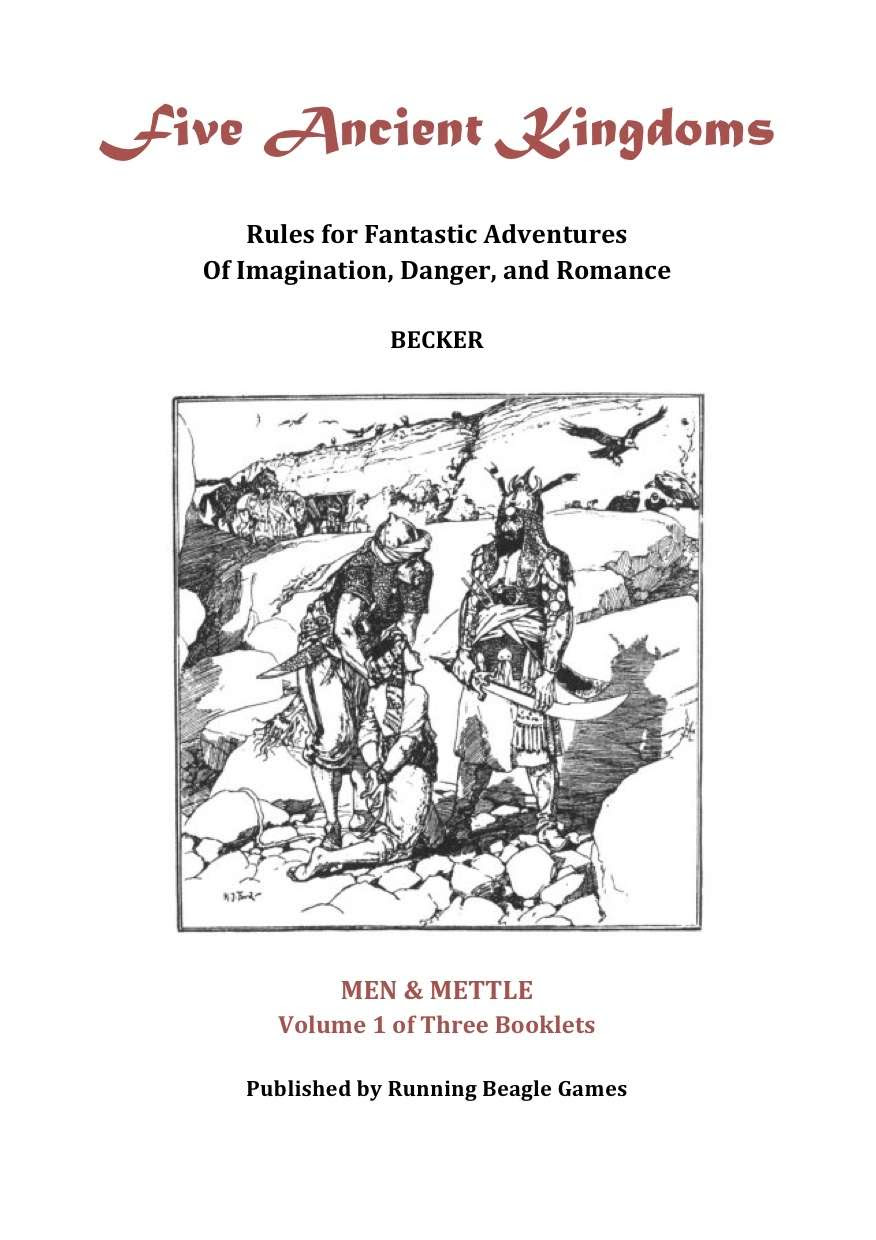 There are three books and one adventure (and dice if you buy it in print) in the Five Ancient Kingdom set, so I'm going to try and go through the books in order. I doubt I'll be able to cover everything, but I'll do what I can.

Men & Mettle is the first volume of the three rulebooks. The default setting is bases off of the Muslim / Arab / Middle East of 800 AD or so (sorry - I don't use CE)

FAK uses d6s for everything. "1"s are read as "0"s all of the time. There are NO exceptions (at least none that I've found thus far). FAK reads much like an OSR ruleset, but I suspect it plays out very differently while retaining a similar feel.

The core classes are Hero (fighter), Magician, Saint (Shaman for those that don't follow monotheism) and Thief. Pretty much the standard fair. What really ups it a notch are the subclasses. There are eight - two per core class. Each subclass's description takes up about 3 or 4 sentences. That's it. It's really a prefect way to handle it if you ask me. Just enough to make them different - not so much that they seem like a whole new class.

Characters have both an alignment (Law / Neutrality / Chaos) and a Motivation (fortune / glory / power / etc). Calling into play your character's motivation can have a mechanical bonus as well as a story effect. Heck, it's mechanics and a roleplaying nudge all in one, which is surprising when the author refuses to label FAK an RPG in the classic sense. I suspect that is much about splitting hairs myself.

The character stats are the ones we know well: STR, INT, WIS, DEX, CON and CHA. Heck, even the order is classic. High prime reqs give and expo bonus, low scores give an expo penalty. High and low scores give an assortment of bonuses and penalties respectfully.

Stats are rolled using 4d6, drop the lowest counting all "1"s rolled as "0". The player may place the scores in any order they desire.

Hero Points are your Hit Points and are rolled each adventure (1 Hit Die per level, roll adjusted by class, all "1"s are "0").

Social Status is also rolled at character generation (and probably should have come before the description HPs, as Social Status is not determined each session but one time only). 3d6, giving a result of 0 to 18 - escaped slave to nobility. Social Status also determines starting gold - multiply by 10 and add 20 (although the example used later in this section neglects to add 20, so that might have been changed).

Last major thing to determine for starting PCs is their starting "advantage". Anything from extra wealth, failed magician apprentice (with some spell use), combat bonuses, story hooks - all are possible - 36 possibilities in all, it goes a long way to making characters unique and the concept easily translates to other OSR games.

Part 2 of the review will deal with mechanics, combats, saving throws, retainers and the like.
Posted by Tenkar at 12:16 PM