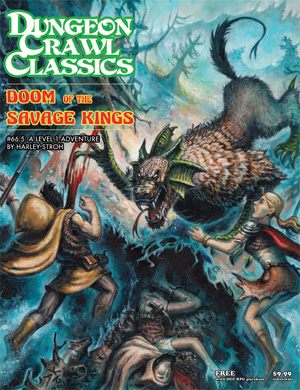 Last night was our DCC RPG session and our second session since the funnel that kicked things off.

Warning - minor spoilers follow for Doom of the Savage Kings.

The party was in search of the village of Hirot, and were almost there when they saw a large group emerge from the mists - 3 dozen peasants in a mob with a tied and gagged young woman at the front and the town leader and his guards bringing up the rear.

Instead, fizzled Charm spell at the obvious leader of the armed men, followed by the Wizard stating he's casting Sleep while the Elf states he's casting Choking Cloud on the soldiers.

Now I need to have the Wizard and Elf roll initiative against each other. Wizard's sleep comes off first. Choking Cloud on the Jarl and his men follows.

32 peasants plus the ties and gagged on - asleep.

Jarl rolls nat 20 against sleep and nat 19 against the Choking Cloud - his men and their horses are not so lucky.

Jarl runs and gets chased down and killed.

Party takes no damage - not even an attack in their direction.

We end the session (which was over 2 hrs of blabbing before we kicked things off anyhow).

I have until next Saturday to figure out the new direction of the adventure.

The Doom of the Savage Kings savaged me, but it was a f'n blast to watch it play out ;)
Posted by Tenkar at 11:20 AM