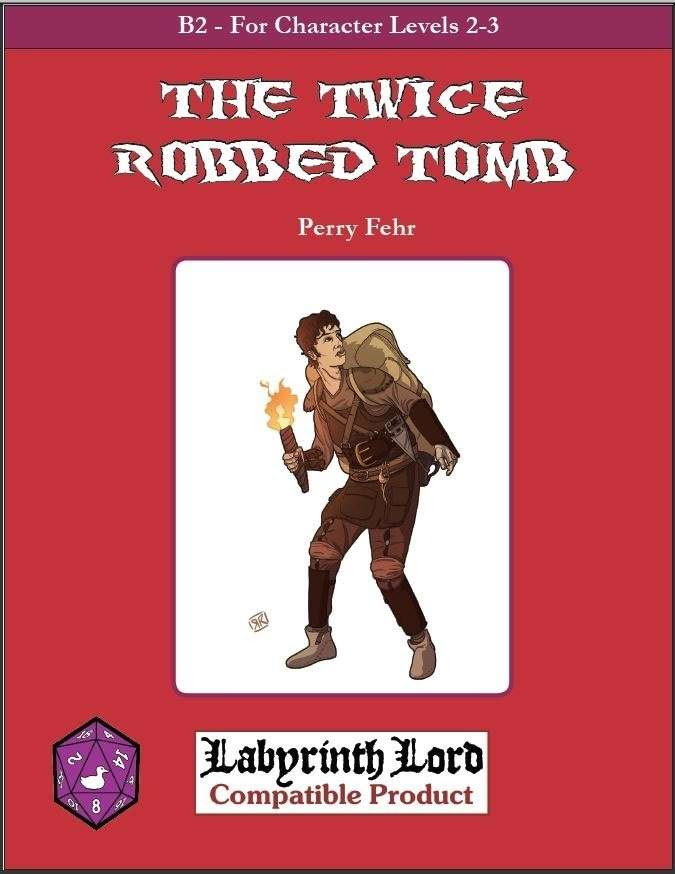 The Twice Robbed Tomb is a nice little adventure for LL or really any OSR system of your choice. It's not huge and is probably playable in a single session, unless you have to herd an unruly pride of cats like I do every Saturday night, in which case it may take multiple sessions ;)

I always appreciate it when a publisher includes a players' map, as I run my games online using Roll20, and I hate inadvertently revealing secret door and traps to the players before the proper time. Purple Duck is pretty good with including an unkeyed map for use in VTTs, and this time is
no exception.

I'm not so sure about the level spread. A party of 6 2nd characters will probably get their asses handed to them. I'd personally move the range to 3-4, with 5-6 characters, but that's because I'd hope to see most of the party survive. Maybe I'm not "Old School" enough... heh.

I do like the adventure. Just enough surprises to keep it fresh, some "save or die" moments that give the observant players ample warning and just enough to play in a night of gaming. For 2 bucks it's damn close to a steal.

The long-disappeared loot of Pheniket the Pharaonic’s tomb was indeed a mere distraction, a few baubles hidden from the looting rebels. The opening of the tomb fifty-odd years ago allowed some of Pheniket’s almost completed efforts to come to fruition, and a demonic being known as a succubus has set up in the uncompleted lower level of the tomb, served by a large pack of ghouls attracted by the necromantic powers of a node of negative energy secured by Pheniket in his last days.

To build her power, the succubus, Invexia, has used her powers of temptation to start a campaign of corruption and seduction, using greed to bring gullible adventurers to Pheniket’s tomb. She knows of the other of Pheniket’s creations, a portal to the Plane of Shadow that he used to control his fledgling kingdom. It is this nexus of power that subsequent plunderers unknowingly seek. She solved the entrance requirement- a certain astrologically-shaped golden key- and is now sending charmed catspaws to ‘sell’ maps and keys to greedy adventurers, bringing loot, prospective undead soldiers, or perhaps even playthings and minions to her spider’s web beneath the Twice-Robbed Tomb…

A Labyrinth Lord adventure for 4 characters of 3rd level, or 6 or more of 2nd level.
Posted by Tenkar at 9:10 PM