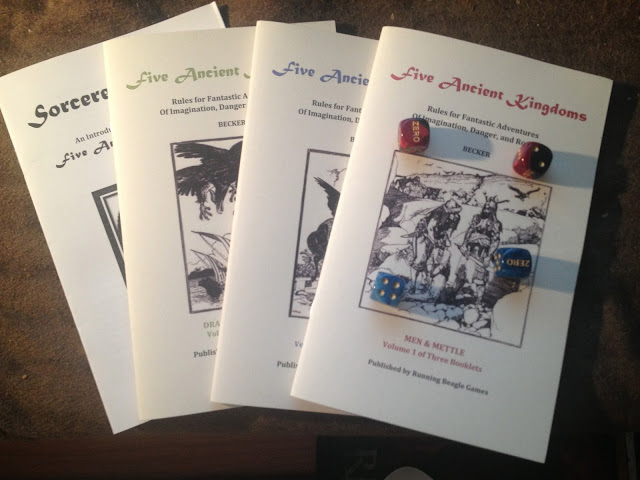 What is Five Ancient Kingdoms? Apparently it's NOT an RPG but a Fantasy Adventure Game. Semantics aside, if you like OSR gaming (and are a bit of a completist) this is probably something you should take a look at.

It comes in with 3 booklets, a short adventure and a set of 4d6. These aren't your usual d6, as where one would normally expect to find a "1" you find a "zero" instead. I need to look deeper to find out how that effects the usual number spread.

So, you get your six "OSR" stats, which are generated using 4d6, drop the lowest and re-roll Zeros. You get the usual 4 core classes (even if they are renamed) and a butt-load of subclasses.

You also get "advantages", which is almost like a prior profession / skill acquisition. You get one randomly determined at 1st level.

Alright, enough random observations from the first booklet - time to read this a bit more in depth.

Available in print only I believe, but a PDF version would look nice on my iPad ;)
Posted by Tenkar at 7:13 PM