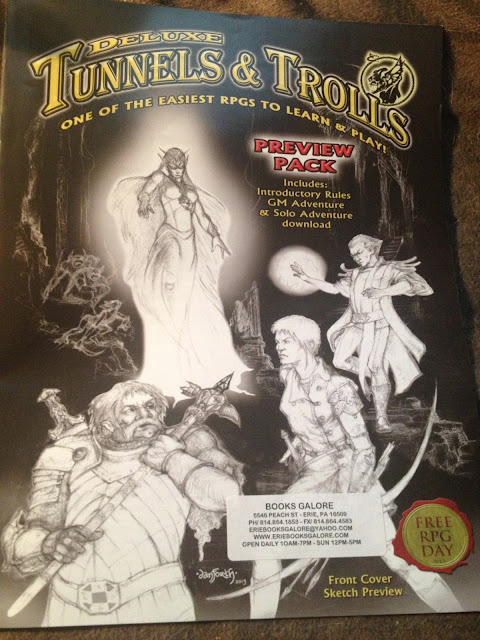 Flying Buffalo released a preview of the upcoming Deluxe Tunnels & Trolls RPG (to be released this summer) as their Free RPG Day contribution. Let me touch on the high points before I hit the low point.

The included rules preview cover characters up to 5th level, including spells. I love T&T spells for the shear simplicity and brevity of their write ups. The OSR could learn much from this, as I doubt any OSR game could fit five levels of spells on a single page and still cover what is needed.

It also includes the classes (all? most?) from the upcoming dT&T release. Biggest change is upping the power of the basic Warrior class, which I had planned to do with house rules. No need for that now I guess ;)

The actual Deluxe Tunnels & Trolls short form rules appear to be very playable. I'm not sure if my own previous rules knowledge is filling in the gaps, but I suspect a good GM could run a short campaign using these rules. He wouldn't want to start will the included adventure, unless he was looking for a truly short campaign of about one encounter.

The Chambers of Z'Tpozz The Mad Dwarf is nominally for 4-8 characters of levels 1-5. Maybe if you had a group that was near the high end in numbers and level there would be a chance of survival if not success, but newbie characters need not apply.

Interestingly enough, they include three ready to use pregens (notice how the minimal suggest characters is FOUR). The are a very good example of how T&T races are not balanced against each other, and why I'd have my group go either all trolls or no trolls - there is no power curve with trolls - they overpower all else. I had hoped this would have been addressed with the new edition  Ah well.

The included adventure has a running clock that can kill the party if they don't move fast enough, but as most encounters will handily kill a party of the average 1-3 level PCs (and probably higher) the running clock isn't much of an issue.

Is it a fun adventure? It looks to have potential, but a group of new players, especially with newly rolled PCs and possibly new to gaming will be left with a poor taste in their mouth.

There is also a free to download dT&T solo you can request from Flying Buffalo. Haven't gotten far enough to request that yet.

So, I'm overal happy with the rules as presented and continue to be amazed at how concise they are and yet still playable. It's a shame the included adventure isn't playable with the rules, at least not past the first encounter and TPK.