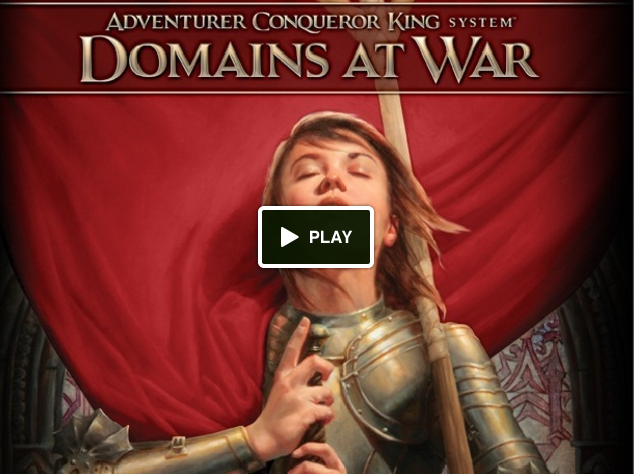 The last time I tried mass combat in an RPG with actual rules was the old Battle System rules for AD&D. That did not work out so well.

I'll know better in 6 months or so if Autarch can pull it off with Domains at War. Judging from the ACKS rules, I'd say they have a pretty god chance for success. I'm in for 35.

I must say, I was impressed with the airing out of the Autarch track record at the Kickstarter site:


Backing a Kickstarter entails risks as well as rewards. As project creators, it's important to us that you are aware of the risks and have a chance to evaluate what we're doing to minimize them.

Any time you pick up a new gaming product, there's a risk that it will fail to live up to your expectations. Using Kickstarter increases this risk. Because you will be the first to get your hands on Domains at War, you won't have the chance to read reviews or get word of mouth feedback before deciding to invest your gaming dollars in it.

To minimize this risk, we made the Free Starter Edition available for you to download before pledging. Its simple rules are the core of the Domains at War system, and should give you a good idea whether it's something that will appeal to you. If you're still not sure, you can start with a $5 pledge and download the manuscripts of Campaigns and Battles, then increase your pledge if you like what you see. If not, you can cancel it at any point before the campaign ends.

Because we'll be using the Kickstarter funds to cover illustration, layout, and printing, you won't be able to check out the final production quality of Domains at War before deciding to pledge. However, Autarch has earned a reputation for high production values and excellent customer service with our previous Kickstarter projects, and we are eager to live up to this standard.

Although it may be reassuring that we've done successful Kickstarter projects before, you should be aware that we also have a track record of not meeting our estimated delivery dates. It's not uncommon for game creators to run late, but we are firmly committed to getting our Domains at War rewards to you on or before the promised dates. The key to doing this will be to learn from the mistakes we made in each of our previous projects.

ADVENTURER CONQUEROR KING: Funding ended 8/6/11; PDFs delivered 2/1/12; hardcovers shipped 4/12/12. We launched this Kickstarter before the requirement to set an estimated delivery date, but it's fair to say we expected to have the rewards ready sooner than we did.

Our mistake with this first Kickstarter was to not limit the scope. Unlike Domains at War, we did not have the manuscript for ACKS finished when we launched the Kickstarter. This worked out well for a new company; the process of communicating with backers gave us lots of great ideas for how to make ACKS better, and we're glad we took the time to incorporate this feedback into the finished product. The problem was that ideas resulting from this collaboration also made the book longer than we originally anticipated, leading to delays.

Now that Autarch has been around a little longer, we're still dedicated to collaboration with backers, but we can apply this to other projects we have on the drawing board. As a Domains at War backer, you'll have the chance to provide input on drafts of the upcoming Auran Empire Campaign Setting, which we intend to contain all the information you'll need to play out D@W battles and campaigns in this fantasy world. We now have the luxury of waiting to crowdfund a product until it already has the invaluable benefit of feedback from the people most likely to use it at their gaming tables.

Some of the delays on this project were due to not learning from our mistakes - the bonus goals added substantially to the scope of the project. We also ran into a new mistake, a bottleneck in our work flow with the internal organization of the PDF.

What we've learned is to plan for at least two ways to achieve each step on the way to creating the rewards. Domains at War has a higher funding target than any of our previous Kickstarters because we've double budgeted for key elements of the process; even if a supplier or contributor takes the money and runs, we'll have funds on hand to cover our backup. To further avoid bottlenecks, we've also set internal deadlines to tell us when it's time to stop waiting for plan A and go with plan B. We hope that this extra redundancy in Domains at War's scheduling will allow us to actually beat our estimated delivery dates if everything goes smoothly, and still meet them even if it doesn't.

The Dwimmermount rewards are still outstanding, and mistakes we made in setting up this project mean it's been a long and difficult journey to the point we're at now where we have full confidence in our estimated ship dates. The lesson we've learned is that there is no getting around bottlenecks that depend on the unique work of an individual. To avoid delays, their work has to be finished before the Kickstarter launches, and others need to be able to take the remaining steps toward fulfilling the rewards even if individual issues intervene.

Only Alexander Macris could have written the complete draft for Domains at War, just as only James Maliszewski could have written the Dwimmermount draft. Having that draft already in place so that someone else could use it to deliver the rewards is an essential safeguard against delays. Although Alex is far and away our most valuable player, Autarch is a LLC with seven members in two cities. Barring a disaster big enough to affect the entire Eastern seaboard, one of us should be able to fulfill our promises to you with Domains at War.

By far the worst risk you face in backing a Kickstarter is that you'll pledge your money and never get the rewards you were promised in return. You can reduce this risk by only backing creators whose track record demonstrates that they're worthy of your trust. We hope that our (eventual) successes with ACKS and the Player's Companion, and our commitment to stand by our Dwimmermount backers despite all of the difficulties on that project, speaks to our trustworthiness.

To minimize your risks of giving us money and getting nothing in return, we've made sure we can set delivery estimates within a six-month window following the time we'll charge your credit card. Being within this window gives you the best chance of getting your credit card company to process a chargeback if it looks like we're going to fail to deliver your rewards or respond to your request for a refund. There's absolutely no reason to think this might happen; we've gone above and beyond the Kickstarter terms of service in offering refunds to Dwimmermount backers. Still, we really hate the idea that you might get completely burned by putting your faith in us, and it's reassuring to know we're leaving your own options open in the event that something goes totally wrong on our end.

Although we're confident that our experience as publishers will let us handle any problems that emerge, Domains at War involves kinds of printing we haven't handled before. During the time we've been developing this Kickstarter we've received proofs of our maps, counters, and play aids. We're confident that we'll be able to produce these rewards with the same quality we've brought to our other projects, and we plan to share the basis for this confidence with you in weekly project updates.

We hope you'll decide it's worth taking on the risks involved in backing this Kickstarter, but it's important to emphasize that this won't be your only way to get hold of Domains at War. We expect that all the items that go into the Complete Domains at War Set will be available in stores within a few months of the time that Kickstarter backers receive them. (Retailers who back the project will have them sooner!) All these items, as well as the PDFs and the components of the Deluxe Domains at War Set, will be available for purchase online around the same time. The only things you won't be able to get once the Kickstarter closes are free shipping, the rewards that involve creative contributions to the finished product, the chance to provide feedback on this and future projects, and acknowledgement in the credits for having helped make Domains at War a reality.