Some Thoughts on Houseruling the Swords & Wizardry Core Document 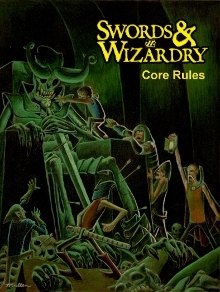 I mentioned last week that we kicked off a Swords & Wizardry Campaign for my "Old Group", consisting of the core of the FtF and later MMO group. It looks like we are going to have a group ranging in side from 2 to 4 (as opposed to my AD&D 1e / OSRIC group on Sat Nights that ranges from 4 to 6).

With a group of such small numbers, I not only have to be ready to tweak the encounters a bit, depending on how many show up (as there is much less margin for error with the smaller group numbers) but I also need to tweak some of the rules a bit, just to balance things out for the characters.

One of the great things about Swords &Wizardry Core (and Whitebox too) is the freely available editable document that you can download and tweak to your heart's content. Edit it, save it, distribute it to my players.

I've already decided I'm bringing over the Ranger clase from S&W Complete, so "bamn!", it it goes to the Tenkar's Tavern Sword & Wizardry House Rules and Tweaks Edition - TTS&WRTE ;) While I'm at it, I'll add in the thief class, and allow demihumans to multiclass.

Granting that bonus spell from high Wisdom at 1st level, when otherwise the Cleric would have none? Slipping that right in. At the same time, I'm going to allow Clerics to swap in a healing spell for any memorized spell of that level or higher. So, he can swap in a CLW for a 1st level spell or higher, allowing the Clerics the flexibility of a varied spell assortment while allowing him to also heal as needed (yeah, it's 3rd edition-ish, but I like it)

A killing blow granting a free attack on an adjacent enemy, much like in ACKS? Yep.

Maybe a skill / feat system like ACKS, SWN or Arrows of Indira - the less players I have, the more hooks I could use to hang things on, and a skill system allows the addition of some thieving abilities without the need of a thief class. I'm up in the air on this one. Or may just steal it from Crypts & Things.

Actually, the Crypts & Things method may be the simplest to implement.

There's more I'm sure that I'll either think up before the game and find the need of during game. We might not have the second session until the end of the month, so I have time to tweak ;)