Over 60 Blogs Have Signed up for the Swords & Wizardry Appreciation Day on April 17! 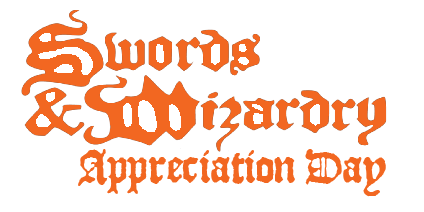 We've hit 61 62 63 blogs that have signed up to participate in the Swords & Wizardry Appreciation Day Blogfest set for April 17, 2013. Damn, this shit is addictive. Second stretch goal has been hit. Now I understand what it's like to run a Kickstarter and watching stretch goals get hit! Well, not really, but damn if this shit isn't exciting! We have bloggers from around the world participating. It's an international event now :)

Frog God Games is offering the "winning" blogger the Swords & Wizardry PDF of their choice from Tome of Horrors, Rappan Athuk or the upcoming Razor Coast.﻿ How will the "winner" be decided? Chris, Matt and myself will work that out.

One random participating blog will get a $10 credit to RPGNow curtesy of me :)

So, if we hit 75 blogs there will be the Frog God Games PDF, a $10 RPGNow credit and 3 $5 RPGNow credits up for grabs. There may be some other stuff in the works. When we know more I'll let you know.

If you want to sign up your blog and participate, add yourself as a comment to this post. If there are any mistakes below, they are mine - point them out and I'll correct them.

+Matt Finch is pondering collecting the material posted on the Swords & Wizardry Appreciation Day's participating blogs as a free PDF or even make it part of a future Knockspell. Go to Mythmere's Blog and let Matt know what you think. Me, I think both ideas are awesome.

2 - Secrets of the Shadowend