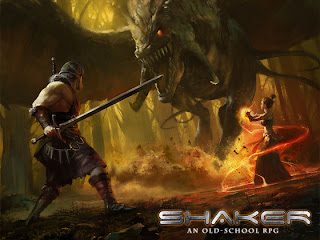 It's about a week later, and the Old School RPG Kickstarter is, to be very honest, a huge distance from reaching it's 1 million dollar funding goal. I'm not surprised, as folks pointed out earlier that there was a lot of flash but little substance accompanying the initial Kickstarter page.

Ah well, my initial view was through rose colored glasses and the distance of time.

That's changed now as they've added some game details, but I do believe they are suffering from the "Too little, too late" syndrome. It's hard to get folks interested in a project if you fail to connect coming out of the box, and I'd mark this one as a failure to execute.

Even the name change - SHAKER - doesn't instil confidence in me, nor does the game's change to a sci-fi type setting (which you wouldn't know by the main imagery).