The Resurrection of The Razor Coast 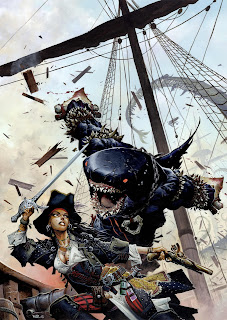 Nicholas' Logue's Razor Coast Setting is something you whisper about in dark corners when someone starts talking about "pre-orders" in this hobby of ours. It just goes to show that anyone, even a name with clout like Nick had back in 2007 and 2008, can royally screw the pooch. I bitch about Kickstarters that are months overdue - there are folks that were waiting over 4 years for the Razor Coast Setting for Pathfinder.

Written and done apparently for years, it was waiting on layout and art. And waiting. And waiting some more. I know I was very interested in it, but I don't recall if I ever preordered it. I may have to search my different email accounts just to make sure.

In any case, it's going to be brought into the light shortly by none other than Frog God. I'm not sure if that's good or bad, as there is a huge amount of baggage attached to it at this point. Still, Frog God will be launching a Kickstarter for it on December 25th.

The word from Frog God:

Razor Coast is the long anticipated Caribe-Polynesian flavored, Age of Sail swashbuckling RPG campaign envisioned and designed by Nicolas Logue.  It is applauded for its ambitious and original design, its epic flavor and its lurid, full-color art  – including a cover by the award winning Wayne Reynolds. Logue tapped a team of veteran designers to help develop and write Razor Coast, including Lou Agresta, Adam Daigle, Tim Hitchcock, and John Ling.

“Frog God Games has committed to doing more than just putting out another pirate campaign,” said Rachel Ventura, Frog God Games VP of Sales and Marketing, “This is going to be a hardcover, full color extravaganza, complete with Player’s Guide and enough swag to sink any pirate ship!”

“We decided to take what we learned from Kickstarting Rappan Athuk and crowdsource Razor Coast, because it allows us to unleash a complete experience for both Pathfinder and Swords and Wizardry fans,” said Bill Webb, Frog God Games CEO.

“We plan to compile the campaign articles into their own book, create a player’s guide, develop and include an independent system for ship-to-ship combat, have treasure chests of unique pirate items, and offer a Tallship Cruise with the creator, Logue,” stated Ventura. “We’re also planning stretch goals that include expanded art and cartography from the same artists the fans have already approved, as well as from new artists of similar style and talent, poster-sized printed maps, custom character sheets, and more.”

“After the Kickstarter gets funded, Frog God Games has pledged to fulfill not only the pledges from the backers but all remaining pre-orders, national and international” said Agresta, speaking on behalf of Logue. “As of October 18th, I finished honoring every refund request Nick received. Making good on Nick’s past obligations cleared the way for Frog God Games to step in and finally bring this to print.”