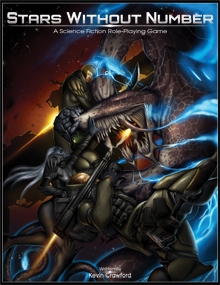 I have to make a confession - When stars Without Numbers was first released, it didn't excite me. Not because it wasn't a good system, but because I really wasn't yearning for a good sci-fi game. So I gave it a quick look and it went back to sit on my virtual bookshelf.

Why then am I currently reading Stars Without Numbers: Core Edition when the free edition is sitting on my hard drive? It isn't just the cover (which is striking).

I'm interested in the society generation tables. (well, and the mech and robot stuff - with a little work SWN:Core and Labyrinth Lord would make for a coherent and balanced alternative to Rifts).

I was expecting something along the lines of the classic Traveller system generation. What I got was more like Microscope. I think I like the system in SWN: CE better than either of these choices. Given a few minutes, you could get some unique world backstory for just about any game system. Heck, I'd borrow this for my next fantasy campaign. Maybe the publishers could publish this section on its own - it is that good.

There really is enough here to cover all the world and government types your might want in your game, with tables that cover just about every aspect of the societies.  If you were to crib this for a fantasy campaign building session, each "world" would be a country, and you'd have to smooth out some of the inconsistencies between countries in the same geographical area, but with the world building tool you are given really could build a world.

As for SWN in general - I really like the class system. Comfortable enough for me as an AD&D grognard to feel right at home while still keeping the system fresh and effectively gear to sci-fi. I do so want to make a Rifts like mashup tho' ;)

If you haven't checked out Stars Without Numbers yet, you can grab the free version and give it a test drive.
Posted by Tenkar at 5:27 PM