Raggi's No Risk Deal - Horror Among Thieves: If You Contribute and it Doesn't Fund, You Get It FREE 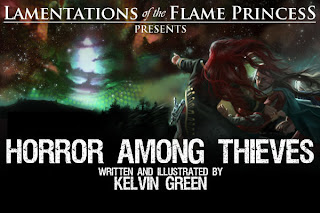 I was kind of surprised by this myself. Last week Kelvin Green announced that if you supported his project Horror Among Thieves and it didn't fund, he'd put it out in PDF for those that attempted to support his project. For free. Damn cool. It's just gotten cooler.

Now James Raggi has come out and said if you support the project and it doesn't fund, he's still print it and ship it to you - for free!


If Horror Among Thieves does NOT fund, LotFP will still be publishing the adventure. It won’t necessarily be on the same timetable as if it were to fund, but we’ll put it out.


Anyone contributing $10+ to the campaign will get the adventure PDF, WHETHER OR NOT THE CAMPAIGN FUNDS.


Anyone contributing $20+ to the campaign will get the physical book, WHETHER OR NOT THE CAMPAIGN FUNDS.


Spread the word. Now there really is no excuse not to fund this thing.


Additionally, Raggi will be announcing another incentive for supporters of the July Adventures. James told me what it is, and I think it may be enough to jump start a few of these projects. It involves someone whose work is very respected among the OSR community. The new sweet point will be $30 bucks. Details tomorrow after James lets the cat out of the bag ;)
Posted by Tenkar at 2:35 PM