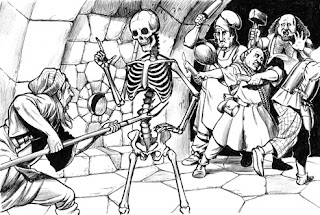 Last night my ACKS group switched over to the "Henchman Mini-Campaign Within the Campaign" for the time being. The group of five has been down to three with vacations and other distractions, so the idea was to play their future henchmen. That idea than morphed into "lets do a DCC RPG Funnel for the ACKS henchmen!" See, thinking is a dangerous thing.

The group used the Purple Sorcerer Character Generator to make their cannon fodder. The stats were fairly easy to convert to ACKS - the only stretch was Luck which morphed into Wisdom, but it worked fine.

I used The Portal Under the Stars from the DCC RPG rulebook for the funnel. I've used it before for DCC, and it runs well and fairly quick - about two hours. I don't want tot give away too much of the adventure, as it is a fun one, and those that haven't had a chance to play it should still be able to enjoy the surprises.

The party went in with 12 PCs (4 for each player) and came out with 7 PCs. Everyone had at least one survivor.

In the short period of time, people became attached to their characters - well, at least the survivors. Even my players marveled at how the process actually worked in play. To paraphrase my group: "they've been trying to figure out 0-level characters in play for 30 years and Goodman finally did it right!"

My players think out of the box. Far out of the box. As in: "Take the Box, Cut Doors and Portals in the Sides, Top and Bottom - Then Step Out of the Box and Give It a Big Kick In the 'Nads From the Outside" type of thinking. Constantly forcing me to think out of the box. Challenging me as the DM - not my authority, but to keep up with them and be willing to go far beyond the text of the adventure. I had as much fun last night as I've ever had as a GM in any game, including games with the same players. They were literally hitting it out of the ballpark. F'n amazing!