Would Rifts By Any Other System Smell as Sweet? 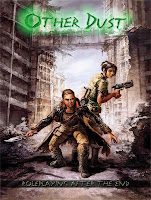 Mix a little Stars Without Numbers: Core with some Labyrinth Lord. Stir in a bit of Other Dust. Use a future, alternate Earth for the setting. Season to taste.

What do you get? Hopefully a balanced, comprehendible alternative to Rifts.

This is going to be a side project of sorts, more for my own amusement than anything else, so Kevin and his Glitterboy hit team have nothing to worry about, even though I will be posting much of the results on this blog as I get to them.

It's more of a borrowing of the core concept than any of the story lines and such. Which makes sense, as I haven't bought a Rifts book in over 15 years ;)
Posted by Tenkar at 8:49 AM