Mini Review - Toys For the Sandbox - The Abandoned Mine (OSR Generic) 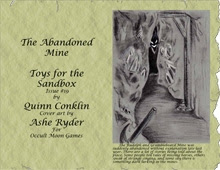 I'm simply amazed that The Abandoned Mine is the 19th release in the Toys For the Sandbox release.  There's a few reasons for that amazement.  Let me count the ways:

I'm amazed that the series has hit 19 issues, as I've missed the last few between The Grumpy Dwarf riffing on D&D 5e and my own preparations for my recently kicked off ACKS campaign.

I'm also amazed that Quinn Conklin can keep on coming up with new and interesting locations and events, let alone 6 hooks or possibilities and 3 twists for each one.  That's one hell of a lot of creative juice.  Do each of the 18 combinations work for me?  No, but each release has had several possible combinations that got my mind going in many different directions on how to flesh them out.  This issue is no exception.

I'm also amazed that we've now reached the point where it's 10 pages of brain storming goodness.  The first release was a mere 4 pages.

The backstory of the Abandoned Mine is excellent, as is the main hook.  Uncovering an ancient evil and the various possible effects set up most of the hooks.  In theory, you could even use more than one hook to set this up and really reinforce the backstory that is given.

I already know where this is being placed in my sandbox.  I'll be changing the type of valuable being mined to fit my setting, but that is mere window dressing.  There is a lot of "meat and potatoes" to be found in The Abandoned Mine, and I think I can squeeze at least two uses other than the main one.  I really love the options available.

NPCs are nicely detailed, even more so than usual, as the extra page count allows for the extra detail.  A Rumor Table and an Encounter Table round out the current release.  Wait, I forgot the section on items.  Nice.  Cursed.  Different.

All is not prefect.  I like the map, and as it is a mine map, it is shown vertically, which is a nice change.  Regretfully, due to the needs to fit the map properly on the page (I'm guessing but I'm pretty sure none the less), the map is 90 degrees off kilter.  I can't turn my monitor 90 degrees, so I'll need to print this one out. I was probably going to do so when using this in game anyway ;)

Also, the price has increased to $1.99.  It's still an excellent value for the investment and the extra page length is definitely put to good use.

Edit:  Did I mention it comes in both print friendly and regular versions in the same package?  Course not! I forgot since it's new.  Oh, and very handy.

Another Edit:  It also comes with a coupon for a free copy of Toys For the Sandbox #5 - The Secret Library (I failed to pay attention as I already have #5)

Toys for the Sandbox is not a module, it is not a campaign setting, instead it is a framework for GMs to use to reinforce their own imaginations. Sometimes players zig when you expect them to zag, other times they take your plot point into a back alley and leave it penniless and bleeding. Each week we present a new location with a map and some flavor text. In addition we add 4 NPCs with a bit of history and a few simple thoughts on how to stat them for whatever game you are playing. There are also 6 plot hooks each with 3 ways to twist them. Added to that there is usually a table or two filled with rumors and encounters.
This week we delve into an abandoned mine that used to be owned by a pair of second generation adventurers. We have awakened evil, strange singing, blood cults, and more precious stones then you will know what to do with. Come to the Abandoned Mines for the treasure, stay for the Dragon God.
Posted by Tenkar at 10:17 PM