An OSR Styled Abstract Combat Map For Your Review

Ian Dimitri was kind enough to take me up on my challenge in regards to an OSR styled Abstract Combat Map.  I really do like the resulting "map" Ian came up with, and I may start experimenting with this in my Google+ Hangout (using Tabletop Forge for the VTT) ACKS Campaign.

Shane Magnus also pointed me to one that he had created that was inspired by  3:16 Carnage Amongst the Stars, but I think Ian is closer to what I need in an OSR style game.  Thanks for the peek Shane, I appreciate it.  I think yours works better with other system, and I may experiment with it when I run an Savage Worlds or Hollow Earth Expedition game. 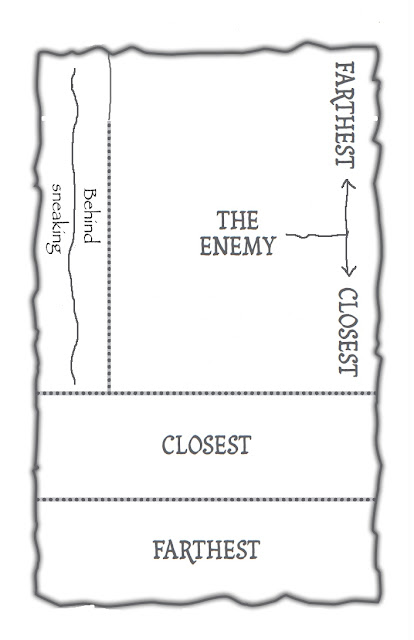 Ian explains his suggested use as follows:

In this version you could represent folks sneaking into a position by putting them all the way to the left and those in position to deliver a backstab by putting them in the "Behind" row and to the left of the enemy's position in their area. The enemy area is also arranged from closest to farthest. I would use simple tokens placed next to the characters or enemies to represent things such as "high ground", "in cover", "prone" etc. Very simple. Very usable.

So, thoughts?  Feedback?  Suggestions?  Other Abstract Combat Maps to add to the equation?
Posted by Tenkar at 4:35 PM