Some Thoughts On Criticals - Curving the Scores 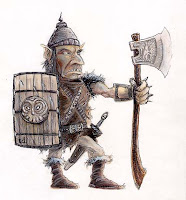 Some people love criticals in their games.  Some hate them.  I tend to be on the fence.

Lets face it, they add excitement for the players, but they are also a hidden albatross, wearing down the players' hit points more over the long term than the cannon fodder they are dispatching.

Additionally, they tend to be a fixed number.  Natural 20 is a common on (you crit 5% of the time, whether your chance to hit is 50% or 5%), or its a range of numbers, usually depending on weapon (thinking 3x here), something like 18-20.

What is the usual critical effect?  Maximum damage or double damage.  Why, because it's simple to figure out.

Here's my thoughts (not that I'm finished thinking) on the matter.

10  You have an opening! Get a free attack immediately against your opponent!  Your free attack may also be a possible critical if you roll high enough.

This does away with automatically adding damage to the attack, while still offering bonuses for the player (or the monster).