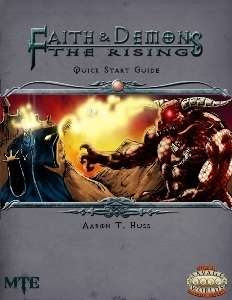 So, what kind of setting is Faith & Demons?  Well, it's our world, around the years 1000 AD (the authors don't use C.E. dating, and I applaud them for it).  The Dark ages might be owing to an end, but creatures from the dark have made it into our world.  It's a world of magic (many types of magic).  It's a world in trouble, and it's up to your players to help stem the tide of the undead and other evil that walks the world.

It's historical in it's foundation, but obviously strays far and wide in this setting, which is fine.  It's a fantasy setting will roots players can relate to.

The quick start includes a short introduction to the setting, a short adventure and 6 pregens.  The one small complaint I have is that the pregens are caster heavy - 4 of the 6 characters are casters.  Maybe it's my roots in D&D, but I feel that the numbers should be reversed.  Well, that and the only part of Savage Worlds I have difficulty grokking is the casting.  Go figure ;)

Still, not bad for free and looks like an interesting setting for Savage Worlds.

As if the power vacuum created by Rome’s fall isn’t enough, the survivors are fighting against multiple forces. Religious persecution has reared its head with claims of heresy against those who are just worshiping as they always have. Tribal conflicts threaten to tear asunder tenuous allegiances. The land is suffering from the fall-out of it all making nomadic life more difficult than typical. The undead armies, horrific demons, and a host of once mythological creatures stalking the landscape create tension from shore to shore. Someone needs to do something. And the lords have decided your party counts as ‘someone.’
Your characters have it in them to be more than a survivor. Lead your nomadic tribe’s defense against all sides to become a legendary warrior. Best a demon lord. Quell the lich’s vampire army. Call down the angels of heaven to fight at your side. Or maybe call upon the denizens of hell to tear apart your foes.
The Faith & Demons: The Rising Quick Start Guide serves as an introduction and a primer to the Faith & Demons: The Rising plot point setting for Savage Worlds. The Quick Start Guide contains everything the GM and players need to begin their campaign through the gothic fantasy version of Earth's Dark Ages including 6 pre-generated characters, new mechanics, and an adventure.
Are you up for the challenge? Join in the fight to destroy the armies of chaos!
Posted by Tenkar at 8:27 PM