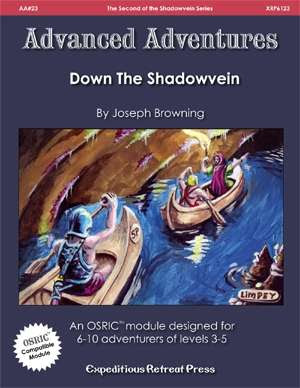 Down the Shadowvein is the follow up to AA#1: The Podmaster of the Sinister Shroom, and can be used to follow that adventure or on it's own.  All the GM needs to supply is an underground river they can canoe down and a map leading to treasure down river.  Its for character levels 3 to 5.

I really wish I could find my copy of PotSS, but it's packed in a box somewhere in storage.  Ah well, onward to Down the Shadowvein.

The GM's map (and the Player's map too) is a hex map, inducing the river and adventure locations and passages.  It's weird but cool that the underground map is similar to an above ground map, even though the party is going to be thinking "dungeon".

If it reminds me of any classic adventure, it's D1-2, when the party travelled through the underdark.  There is much of that feel here, as the random encounters the party may interact with include merchant trains.  Merchant trains underground, ya gotta love it. :)

The main encounter areas are mapped out like dungeons, so your players (and you) will be in comfortable surroundings at times.  In truth, this plays out (almost) like a sandbox campaign underground, as the players have choices in the directions they will take.

Still, it is not the usual sort of adventure, and it may be awkward for some GMs to run it.  It is underground, and most travel will probably be via river, but there are also numerous passages for the party to stumble through.

Depending on how thoroughly the party explores their sandbox, this could take two to three 4 hour sessions to complete.  There really is a lot to explore in the two dozen pages in this adventure.

You also get 2 new magic items and 4 new monsters.

Down the Shadowvein is an OSRIC(tm) module designed for 6-10 adventures of levels 3-5.

You carefully load your canoes and launch into the fast-moving waters of the underground river named Shadowvein. The Pod-Caverns of the Sinister Shroom behind you, the veracity of the map that is to be your guide into the dark unknown will soon be tested. Hopefully what is written is accurate, but if it is not, your wits, wile, and brawn should serve you well as you journey down the Shadowvein!