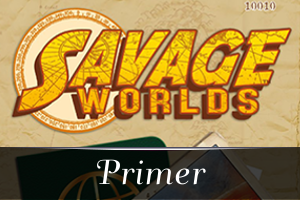 The more I look at Savage Worlds, the more I like it.  SW and Open D6 may become my main alternate rulesets for my second slot of gaming.

Why Open D6?  I had some experience with it back in the days of the old West End Games, ran some Star Wars D6 and had a few of the other D6 (Masterwork) powered games.  The fact that it is free these days means that my players should have no excuse in not having a copy of the rules ;)

Why Savage Worlds?  It's a highly supported system.  It has what appears to be an infinite number of settings, either official or fan supported.  There is a lot of strong third party material for the system.

Besides that, the Savage Worlds Test Drive rules are an excellent introduction to the system.  A player could probably get away with never going beyond such (so long as the GM was willing to help with character gen or provide pregens).

I really like the idea of short arcs to keep things fresh, and universal systems allow you to do so.  I like the idea of a short arc using Solomon Kane, as the fiction is pretty much all short stories (short "arcs" if you will).  I'm considering checking into the Mars setting (what with John Carter getting some push theses days) as well as Deadlands (a setting I haven't really checked out since it's old days when it was it's own system).

Now, quick questions to all the Savage Worlds junkies:

Should I be looking to pick up SW Horror?  I see it is recommended / required for Deadlands, and would probably be useful for Solomon Kane.

For gaming via G+ Hangout - what's the alternative for using a deck of cards for initiative?  Since everyone can't share the same deck, this would be an issue.  Of course, if I used Fantasy Grounds, that's built in, but then not everyone has a large enough computer screen to squeeze in both a VTT and the video from the Hangout.

Oh, and anyone have thoughts on Reality Blur's Old School Fantasy for Savage Worlds?

Another Oh, I found a Savage Worlds Primer - Saweet!