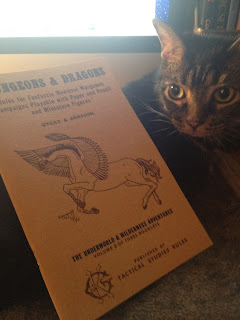 Well, enough about the next incarnation of D&D.  Let's continue our look back at the Original Edition of Dungeons & Dragons.

So, what does Volume 3: The Underworld & Wilderness Adventures give us?

Well, we get a cross section of a dungeon.  Six levels (and side levels) and connections (Stairs, chutes and the like).  I never mapped out a cross section of any of the dungeons I've run.  Most didn't go beyond three levels (if that). Still, and interesting view of how it could be done.

The sample dungeon level is more corridors than rooms.  Heck, if the PCs can't find the first secret door, it's going to be a very small dungeon for them.  That being said, it is a well explained dungeon level.  It is also an example of "do as we say, not as we do":

5.  The combinations here are really vicious, and unless you are out to get your players it is not suggested for actual use.  Passage south "D" is a slanting corridor which will take them at least one level deeper, and if the slope is gentle, even dwarves won't recognize it.  Room "E" is a transporter, two ways, to just about anywhere the referee likes, including the center of the earth or the moon.  The passage south containing "F" is a one-way transporter, and the poor dupes will never realize it unless a very large party (over 50' in length) is entering it.  (This is sure-fire fits for the map makers among the participants.)

Then three's this little tidbit about Tricks and Traps:

The fear of "death", its risk each time, is one of the most stimulating parts of this game.  It therefore behooves the campaign referee to include as many mystifying and dangerous areas as is consistent with a reasonable chance for survival (remembering that the monster population already threatens this survival).  For example, there is no question that a player's character could easily be killed by falling into a pit thirty feet deep or into a shallow pit filled with poisoned spikes, and this is quite undesirable in most instances.

Risk is good.  Killer DM not so much fun.  Good advice, and something that most people don't seem to associate with Old SChool D&D.

It takes 10 minutes to move 2 moves or 120' for a fully armored character, twice that rate if running and not mapping.  So, you can run at a rate of 24' a minute if you pass on the mapping, or 12 ' a minute if you are mapping.  Did anyone ever stop and figure out how slow 24' a minute is when they wrote this game.  Assuming you are running with torches and lanterns, and making lots of noise with the jingling of armor, 24' a minute is the equivalent of taking a minute to cross a four lane crosswalk.  Or thirty seconds to cross a room.

Ah well, this book is going to take a couple of posts to progress through at 12' a minute ;)
Posted by Tenkar at 9:46 PM