RPGs That Can Be Played in 90 Minutes (or Less)

I don't want to say "an hour" because lets be truthful, the first 15-30 minutes of just about every game session is the catching up and bullshitting part of the game.  RPGs are a social experience, and part of that experience is socializing and bonding.  Therefore, I'm going with 90 minutes, as I doubt most of us have access to disciplined game designers at our place of employment that we can game with over lunch time ;)

So, where does that leave us before Mike and Monte gift us with the new and improved D&D Edition, the edition to unite all editions, which can be played in 60 minutes and comes in more flavors than Ben and Jerry's Ice Cream?  The rules need to be simple and combat resolution needs to go quickly.  Nearly any game can be run in 90 minutes, but a few will actually allow you to accomplish stuff and progress the adventure.

Surprisingly, we do have a few choices: 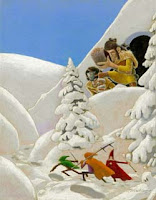 I'd suggest that one try the Original Dungeons &  Dragons White Box Edition, but that's going to set you back over $100+ on Ebay.  Instead, I'm going to point you to Swords & Wizardry White Box Edition.  It's a nice, cleaned up clone of OD&D, and best of all, it's free in PDF.  It's much easier to grok than the original ruleset from 1974, and you can even grab the rules in MS Word Format - so you can insert your own house rules and pass them off to your players. 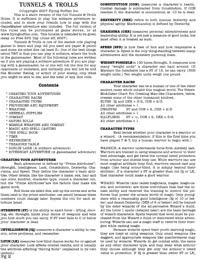 Tunnels & Trolls is another fine choice.  Character generation is a breeze and combat is simple.  Stick with T&T 5.5e or earlier, as the "monster death spiral" is more pronounced.  What this means is that as monsters take damage, they do less damage.  As damage is given to the losing side when dice pools are compared, the "monster death spiral" can greatly speed up combats, especially when the final resolution is obvious.  Monsters are simplified as an Monster Rating (MR) which quickly translates into Combat Dice and Combat Adds.  Once you understand the the system it is easy as pie and all you need are a bunch of d6's.  You can check out the T&T Quickstart Rules for free here. Ancient Odysseys: Treasure Awaits! is a more recent title from Precis Intermedia.  It has an Old School feel with some New School mechanics.  They system is fairly simple, using d6's.  You get the the standard fantasy races, three character classes (warrior, wizard and rogue), a basic skill system, a simple resolution system and simplified tactical (non-tactical) map.  It's a sweet system, which can be played solo (just like T&T) but I think works much better in group play.  The PDF is $6.95 (and includes a version ready to be printed out in double sided digest size). 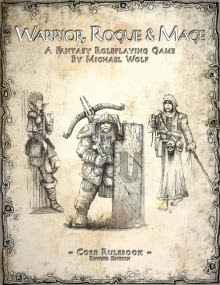 Warrior, Rogue & Mage is a system that I really wish I have had a chance to play.  It's a streamlined system that looks to my gaming eyes as something that could be played in an hour and a half or two, and yet still get the feeling of having played a longer session.  Did I mention that all you need are d6's?  Seems to be a trend ;)  Resolute, Adventurer & Genius is the pulp version of the rules.  Did I mention that both of these rule sets are free?