And So It Was Said: "Let There Be an ACKS Campaign"

and it was good.

Or, at least, I hope it will be good.

We collectively decided to pull the plug on the current Saturday Night game.  We tried to give it a shot as a reboot, but that wasn't satisfactory.  The same issues were there in the last session that were there in the previous one.  It wasn't the GM, it just "was".

So, looks like I'm up.  I'll be starting up an Adventurer Conqueror King System Campaign.  As I'd like to have a updated hard copy (last summer's Gen Con pre-release i'd have to compare to the latest PDF version) and that should be coming sometime around the end of the month (along with the pre-release of the Adventurer's Companion) I'm figuring about 3 weeks or so before I'm up and ready.  It's a bit sooner than I had planned, but as a natural procrastinator I'd never lock myself down to a date if I didn't do it now ;)

That should also give me enough time to get the next issue of Loviatar in hand along with the next installment of the Hex 000 series.

I'll let it be known if there is a call for players.  I already have 3 committed from the current group, and there may be more.  I'd like to go with a full party of 5 or 6, so we can survive the occasional "real life random events" knocking 1 or 2 out on any given week.

Google+ Hangout handles gaming pretty well.  I may want to have a whiteboard available for use, and I'm leaning towards Gametable at the moment.  It's cross platform and free.  From my experience, a whiteboard is more important than an imported map, chat client, dice roller - any of that stuff.

Well, the video and voice is even more important than the whiteboard actually.  Video and voice bring the game alive, and gives you a true tabletop experience.

In any case, I'll have a second game of some sorts up and running at some point after the first. 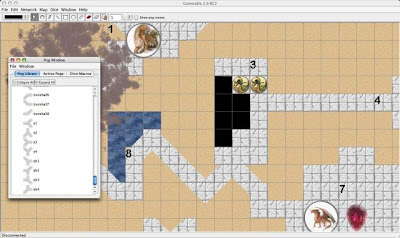