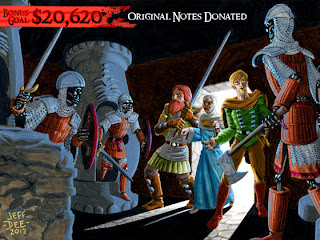 I really have my fingers in too many Kickstarter Projects those days.  Well, at least my monetary fingers, as I have found way too many projects to support these days.  I'm not complaining, mind you. If the projects weren't awesome, I wouldn't be supporting them.

Dwimmermount is James Mal's homebrewed megadungeon that is seeing the publishing light of day with the help of Tavis from Autarch, better known as the company that brought us the Adventurer Conqueror Kings System.  I think Dwimmermount might have set a Kickstarter record for the speed it which it met it's primary funding goal ;)

Dwimmermount will be released via Kickstarter in both Labyrinth Lord and ACKS flavors.

As a backer, I've gotten a peek already at some of the first level of Dwimmermount.  It's damn nice.  Lets see, if I uses ACKS as the system, Dwimmermount and Barrowmaze as the two megadungeons, Christian's Hex 000 hex crawling sandbox setting from Loviatar and The Toys For the Sandbox to fill in when needed - I going to have a pretty rocking campaign.

I may need to start this before the Querp campaign I was thinking of...
Posted by Tenkar at 8:39 PM