The Problem With The Paladin's Detect Evil Power in AD&D 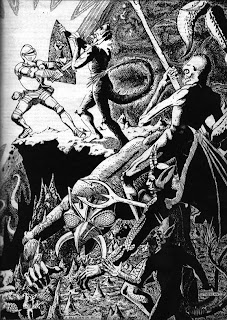 As I flip through my newly acquired second copy of the AD&D Player's Handbook, I find myself stopping on page 23.  You know the page.  I shouldn't have to tell you.  One of the most famous AD&D Core Books pieces of art - A Paladin in Hell.  I just love it.  The only problem with it?  The Paladin.

Detect evil at up to 60' distance, as often as desired, but only when the Paladin in concentrating on the presence of evil and seeking to detect it in the right general direction.

What is he, Green Lantern? "No evil shall escape my sight"

Think about it.  You'll (as a DM) never be able to infiltrate the party with an evil NPC.  Every character, every creature he encounters, he can just plop his detection power on and and weed out the evil.  He's more effective than a black light at a crime scene.

At least with Detect Magic, it's a spell that has to be memorized.  It eats up a spell slot.  It has limited uses - it's not at will.

Detect Invisibility, Detect Illusion, even Detect Lie - all take a spell slot, all have fairly limited uses (but work really well when they are on target).

Why the hell did Paladins get this as an at will power?  The issues to game balance are huge.  Not that I thought about that was as a kid, but today I'd be Detecting Evil behind every door, before I make any turn in a corridor, before I gave the stable big my horse.

I'll rant about the continuing emanation of a Protection From Evil in a 1" radius around the Paladin later (is that 1" as in an inch, or 1" as in AD&D 10'?).

All this and a cold from hell.  I could have used that Protection From Evil shit, or the immunity to disease.  Sigh.