The Myth of THAC0 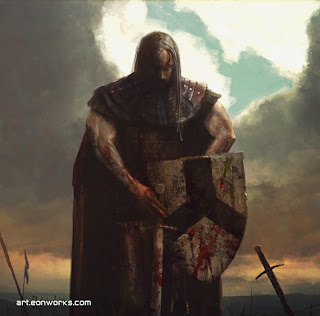 I read on another blog a few days ago (very new blog from 2012 - if you know it PLEASE let me know!) that BAB / BtH / THAC0 are all pretty much bullshit.  You aren't climbing a ladder when your character's chance to hit increases, because your level appropriate adversaries see a corresponding increase in Armor Class protection.  In effect, you are running up a down escalator.

The first game in the Dungeons & Dragons family that seem to recognize this was Castles & Crusades.  The combat bonus rate of increase for all classes with the exception of fighter based classes took a sizable hit from the D&D norm.  The cleric took the most noticeable hit his combat abilities from the D&D norm. I'm sure the main reason for this chance was to give the fighting classes a more noticeable niche of their own.  Still, it takes some of the importance off of AC / BtH.  As long as ACs don't increase at huge rate, there is less need to increase BtH and less need to pile on the magic items.

Raggi's Lamentations of the Flame Princess' Weird Fantasy RPG takes it a huge step further.  He totally removes any kind of combat skill advancement from all classes but the Fighter.  My initial reaction to this was a severe need and desire to house rule combat advancement back for the rest of the classes (and I probably would for Dwarves and Halfling, as they really have nothing going for them as it stands).  After taking a step back (and a few months away from my initial reaction) I realized this system works in the default setting of LotFP's Weird Fantasy RPG - 95% of your adversaries are normal men and such, fantastic creatures are unique and custom made and the world is magic poor.  Adversaries aren't going to be increasing in Armor Class all that greatly as the PCs level, and neither will the parties AC be changing all that much.  In some ways, the Fighter's niche of combat advancement is smaller then expected, as it is less valuable in a system that keeps Armor Class numbers within the realm of the non-fantasic.

It's an elegant solution to running up the down escalator.

I remember playing AD&D, back in my younger days, and if the party's front line wasn't in the negative numbers for AC by the time they were nearing name level, they were going to be hurting.  Just to maintain their place in the THAC0 / AC race, the need to dump magic armor and weapons an them was huge.  Such was the start of the Christmas Tree PCs  that were much the talk in 3e.  There are no Christmas Tree PCs in Weird Fantasy.

So, when your Fighter increases in his BAB in Swords & Wizardry, remember it's basically a wash.  Maybe not when fighting the mooks, but then they are books for a reason.  Your Fighter's increase in his to hit bonus has just been offset by a decrease in your level appropriate adversary's Armor Class.  Holy Shit!  Raggi was right! ;)

The more things change, the more they remain the same.