The Myth of THAC0 - Complications of Removal 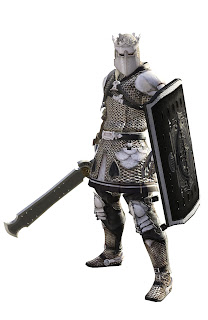 If you accept the idea that an improving THAC0 is not needed by most classes depending on the type of campaign run (especially low magic / low fantasy type settings), there is still an unforeseen complication - Strength becomes a prime stat for the middle combatant classes (clerics / rogues and the like).  (The Myth of THAC0)

If THAC0 will never increase for these classes (or has a slowed increase as in Castles & Crusades), a Strength Bonus is more important than it would be if these classes had their normal progression.  A +2 bonus to hit from Strength may be the only bonus a cleric or specialist (let alone any of the demi-human classes) will ever see to their ability to hit opponents in combat in LotFP's Weird Fantasy (by default a very low magic setting).  Actually, in WF, clerics really get no class related bonuses for a high wisdom (except crafting at higher levels), so one would be best served by putting their best score in Strength to become a viable 2nd line combatant.

Interestingly, neither Castles & Crusades nor Weird Fantasy slows down the combat progression of the fighter class.  You still have a class capable of mowing down mooks, as well as improving in their ability to hit level appropriate enemies in Weird Fantasy.  Castles & Crusades is different, as non fighter classes do increase in THAC0 (although slower then in classic D&D systems) and magic items (weapons and armor) are assumed in the system.

My feeling is that THAC0 means much less in Weird Fantasy then any off the other OSR style games, and is therefore less of a perk than it appears.  Sure, they'll be nearly auto-hitting most opponents at higher levels, but the damage output will remain fairly static as hit points rise on both sides of the combat.  Combats are going to be decided by attrition (which happens in many high level D&D style games, but without a corresponding increase in damage output it's going to be longer then usual.

Which then leads to the following thought.  Armor Class, Bonus to Hit and Hit Points all impact on each other.  You tweak one, and it effects all in some manner or form.  If you tweak the THAC0 to be less powerful, do you need to do the same with AC or HP to keep balance?  Or do you just accept the idea that combats will take longer?

(The post at the Howling Tower that got me thinking...)