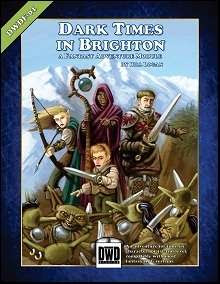 I'm very happy I found Dark Times in Brighton.  After yesterday's fiasco I needed something to brighten my mood, and this was it.  Dark Times in Brighton is an adventure / local setting / possible sandbox for 1st and 2nd level characters using the Labyrinth Lord rules (but easily used with most of not all of the various retro clones).  The publisher, DWD Studios, was apparently started by two of the guys involved with the StarFrontiersman magazine.  If you've ever red the mag, you know they do good stuff.  Dark Times in Brighton is no different.
Bookmarked PDF?  Check
Author's notes to give insights to the read inter spread though out the adventure?  Check
Professional looking layout and artwork?  Yep
Interesting adventure and surrounding lands?  Present
Top quality maps?  Score!
This really is a complete package to start a new campaign, either dropped in your own campaign world or building out from the area described within.  I fully expect (or at least hope) that DWD Studios plans to continue building around this particular neck in the woods.  It would make for a nice campaign.
From the blurb:

Dark Times in Brighton is an adventure for four to six characters of 1st - 2nd level.  Although designed as a Labyrinth LordTM compatible product, It is easily compatible with most fantasy RPG systems.  In addition to the adventure itself, contained within these pages are details of Brighton and its people, a town that could easily become an important part of your character's careers as adventurers.

The town of Brighton exists in the north, at the source of the Daakencraags where the Darkenwolde Forest shades the winding Brother’s River. The legendary adventurer, Richan Thatcher (along with his party of adventurers) carved the place away from a once mighty goblin kingdom. It has prospered for many long decades, until now.

Townsfolk are disappearing from the surrounding countryside. Goblins are on the march once more. If that wasn’t enough, a terrible blighting disease has infected the waters and not even the curative magics of the Temple of the Winds can thwart it. This is indeed a very dark time for Brighton.

Too old to do anything about it himself, Thatcher has sent out a call to any adventurers who will swear their swords to his mighty town and its innocent people.

Are your players hero enough to face down a growing goblin horde? Are they brave enough to fell the mighty goblin shaman, Vir-Kayik? Are they clever enough to find the source of the blight and cleanse the town’s water source? Are they the light to end these dark times in Brighton?