The Draconic Archeologist: The Birth of The Dragon - Issue #1 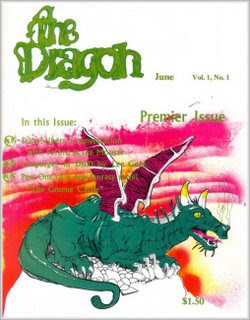 Sorry to say, but issue #1 of The Dragon isn't much better then it's cover, which is a tie-dye psychedelic trip of sorts... which for the time (June of 76) it may have resonated better then it does now.

Issue #1 stands in at 32 pages, which isn't bad (and I believe is longer then any of The Crusaders that have been published - Dragon certainly fits more words on the page, but I digress).  My first turn off?  The about of space devoted to short fiction.  In all my years of reading The Dragon, I don't think I EVER read any of the fiction.  It just never appealed to me.  So, in my eyes, a waste of space.  In your eye, it may have some value.

Getting back on track a bit, we get a D&D article on How to Use Non-Prime-Requisite Character Attributes.  I have no idea why it refers to the non-prime reqs.  In any case, this convoluted system requires you to roll percentile dice, then refer to a table that will tell you to roll a certain number sided die (4 sided, 6 sided, etc) then take the new number generated, multiply by the stat score in question, then roll below or equal to that number to determine success - thank god this never became official.  I would have left the hobby for sure.

Languages by Lee Gold (of Alarums & Excursions fame) - Interesting take on learning new languages in D&D and languages in general in D&D.  Common does not necessarily equal "native" language for humans.  This article is a small gem.

This issue's Creature Feature gives us the Bulette (pronounced boo-lay).  For 30 years I've been calling it a Bullet.  Ah well, live and learn.

Hints for D&D Judges in this issue deals with mapping the wilderness for your players.  The wilderness is a pretty lethal place.

Hobbits and Thieves for The Dungeon Board game - I guess the cease and desist from the Tolkein Estate was still in the mail.

So, a gem, some useful pieces and a scary piece of poo as the first D&D article in the magazine.  Hopefully, Issue 2 picks up just a wee bit of the slack.
Posted by Tenkar at 9:34 PM