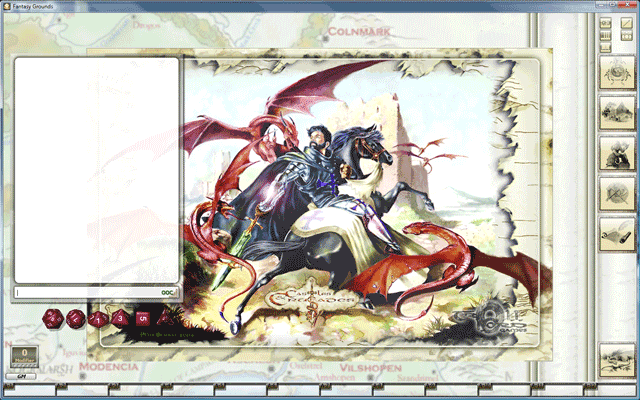 This isn't going to be a review.  That will come later.  Nope, this will be about how I've used FG2 as a player, and soon, how I will as a DM.

I first picked up Fantasy Grounds back in late 2005 or early 2006... not really sure.  I had already found Klooge, even spent an evening playing in a playtest of a Rolemaster add-on for it, but except for a Play-By-Email game back in the heyday of AOL (damn I wish that game had continued, the GM was an amazing artist and storyteller) I didn't have any experience in on-line gaming.


I'll admit I was overwhelmed at first, and it wasn't until spring of 2008 that I actually got to play in a Fantasy Grounds campaign.  A nice Warhammer 40k Dark Heresy campaign.  The game rocked.  Some personalities conflicted.  New players were brought in.  Warhammer Fantasy Roleplay, Savage Worlds, Serenity - entertaining false starts. That group lasted a bit over a year and I have no complaints.  Those patient souls taught me a lot about using the Fantasy Grounds Software.  They made me ready from my next campaign:  Castles & Crusades.

I've been playing in a monthly (was weekly, then hiatus, then back again) Castles & Crusades game since fall of 2008.  Not a bad length of time for an online campaign.  Lost players.  Gained players.  Not one personality conflict that I've noticed, just an overall fun group to game with.  Leveling is slow as molasses going up hill, but at the age of 42 I've discovered its not the levels, its not the loot, but the time you spend getting there that is important.  Wonder how well that carries over to real life? ;)

Soon I'll be getting my own Labyrinth Lord game running via Fantasy Grounds.  I doubt I'd be at this point without the fellow gamers that guided me so well.  My hat is tipped to all of them.

Next up I'll give a more review like article on Fantasy Grounds 2.  I just felt the need to ground myself in a bit of personal history first.  :)
Posted by Tenkar at 9:03 PM