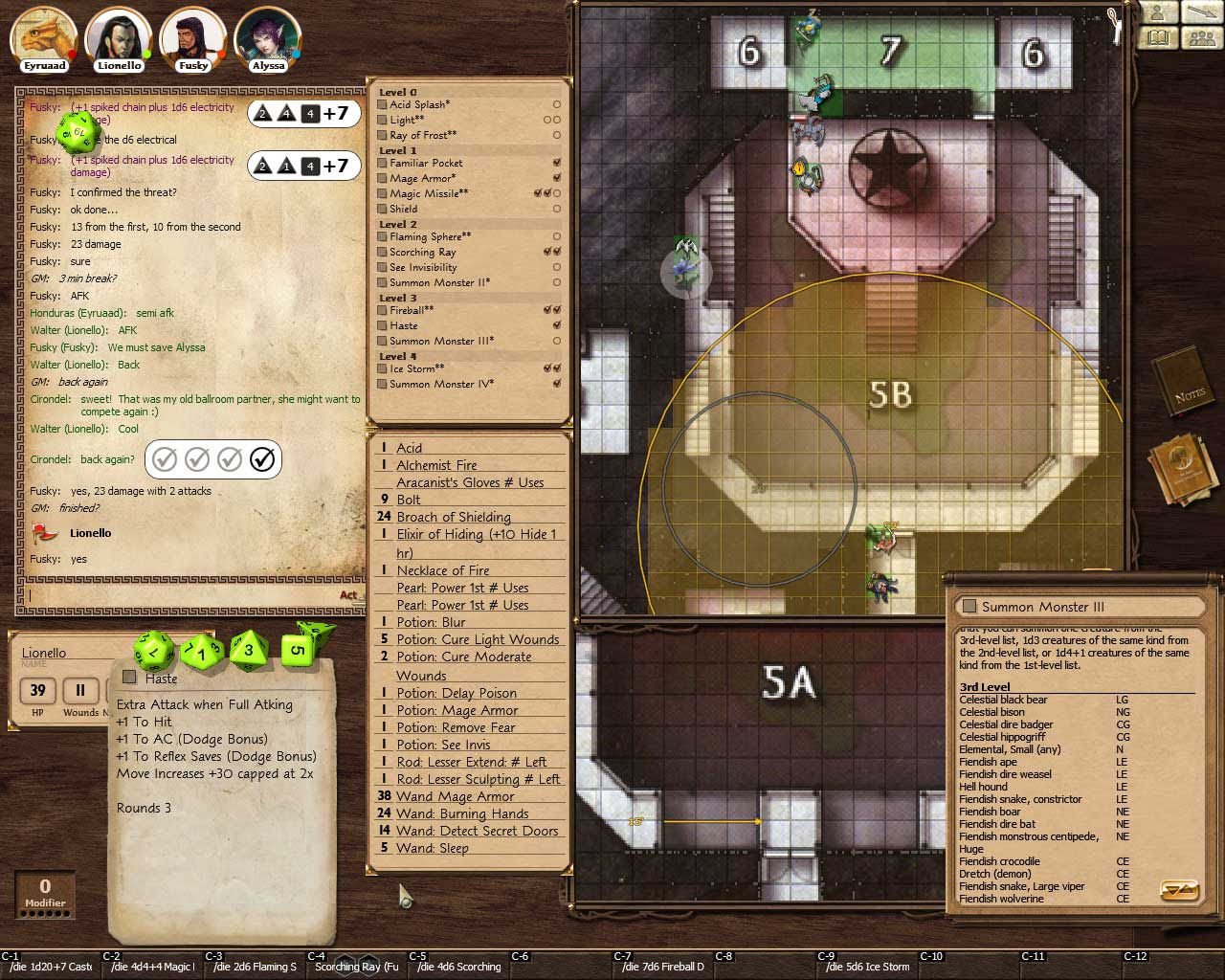 Its much easier to review a game or RPG supplement than it is to review a Virtual Table Top.  Everyone has different gaming habits, as is easily seen by the different and overlapping style of play, let alone "Old School" vs "New School".  It seems to be even further afield when it comes to VTTs.  The major ones each seem to have found their niche, tho there is overlap with features.  So take my opinions with a grain of salt... or maybe even a pinch.

Fantasy Grounds 2 is probably the most popular commercial VTT on the market.  What are it's main draws?  They are simple really.

Amazing 3-d dice with physics and everything.  You know how players like to play with dice at the table, rolling even when they are not up?  The dice in Fantasy Grounds 2 are so cool you'll find your players doing the same online.  It's addictive, what can I tell you?  heh

Character sheets.  Nothing quite like interactive, self bonus populating, character sheets.  It really does speed things up having all of your character's info right there in front of you, laid out professionally.

Support for many of the major games out there.  Some are commercial add-ons (yes, you have to pay) and some are community created (free).  Generally speaking, the commercial ones add in bells and whistles and access to the rules in game... community driven projects rely more on accurate character sheets.

Off the top of my head, supported games include:  3e, 4e, C&C, Savage Worlds, Labyrinth Lord, CoC, Basic Roleplaying, GURPS, Traveller... there are more, and there is also a genric character sheet for use in unsupported games.

An active community.  An active gamers seeking games / games seeking players forum.  There are always games looking for players, although it may not be for the system you want.

Of course, there are some weaknesses with FG2.  They are big or small, depending on how important the feature is to you.

There is a Fog of War for mapping, but it is not line of sight based (like some other VTTs have).  As the GM you have to reveal the map as you see fit, it is not dynamic.

The dice aren't the easiest to convert to games that need special dice.  There is an extension for FATE/Fudge dice, but the work around isnt the most elegant - hell, its plain awkward.

No built in mapping program, just a chalk board.  There are free and commercial mapping programs out there that do great jobs, but some have remarked on this lack of a feature.

Price.  It isnt cheap.  Then again, neither are commercial RPG game books, video games, computer games, MMORPG games.  It's a one time expenditure.  For some, the bells and whistles pay from themselves.  For others, free alternatives do the job they need.

No VOIP built in, but again, if you want the feature there are many alternatives for free (Skype).

There is a learning curve.  Really, expect to be lost for a bit.  Play as a player before running a game if you can.  Watch the damn tutorial videos.  I can't stress this enough.  Watch and learn.

I've really enjoyed playing in FG2 campaigns and I'm working on running my own to start next month.  It will be my first time DMing in over 13 years.  This is the VTT I've chosen to run with, although that may change down the line.  It fits what my group and I are looking to do at the moment.

So, how do I rate Fantasy Grounds 2?  An exceptional Virtual Table Top that does what it does well.  It's not perfect, but then we are all waiting on perfection for a long time ;)
Posted by Tenkar at 6:59 PM