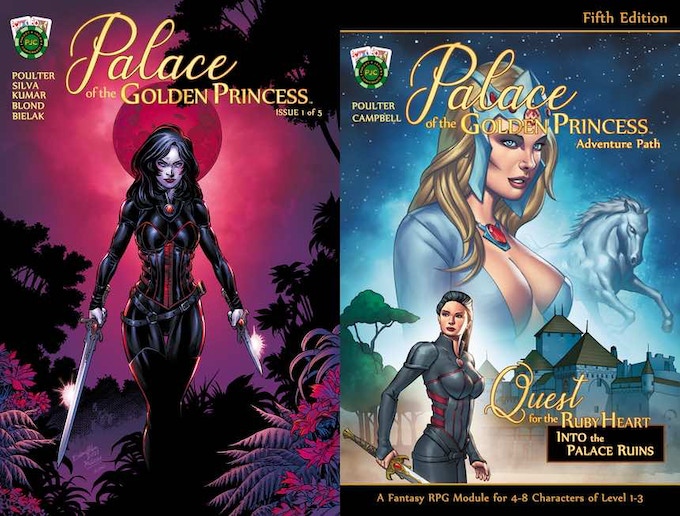 5e module and comic based on the first RPG adventure written by a woman.

In 1980, Jean Wells, the only woman in TSR's design department, was assigned to write an adventure for the "B" (Basic) series that would teach new players how to play D&D using rules for the D&D Basic Set. This module would be unique as it was the first TSR adventure authored by a female designer. Wikipedia - Palace of the Silver Princess

It's not often, if ever, that I start a blog post with a quote from Wikipedia, but I thought it was appropriate this time ;)

Now, on to the "connections". The project creator, author of the comic, and co-author of the adventure is Preston Poulter. Preston is a frequent participant in The Tavern's weekly hangouts on Thursday Nights on our Discord Server and loves creating comic books. Courtney Campbell is a prolific and highly skilled writer of RPG material. Courtney has a blog - Hack & Slash - and can often be found lurching in the Common Room of The Tavern's Discord Server. Heck, he was there earlier today.

So yes, I know the main folks behind the Palace of the Golden Princess #1 Kickstarter project. Quite simply, if Courtney is writing RPG material, I want it. If Preston is publishing a comic book, it will literally look amazing (parental supervision may be required on some comic book titles, as the artwork can be risque ;)

So, what can you get and for how much?

The comic book, the adventure, and character sheets in digital format will be 10 bucks. Print of the comic book adventure will be 20 bucks. Then it goes a bit crazy but in a good way. There's a Deck of Many Things, limited covers for the comics, resin minis, replica swords, wall tapestries, and more. Phew! Have at it. Damn, but the sword tempts me ;)

Subsequent to the success of the Palace comic, I sought to build a campaign to offer a module set in the world of Palace. Ultimately, I partnered with prolific module writer Courtney Campbell to bring you an adventure that, while published under the current 5e ruleset for the world's most popular roleplaying game, has been customized by Courtney and myself to embrace the play style of the 1980s. I invite you to download our introductory release, available on drivethrurpg as a "Pay what you want" PDF.

Rejecting the modern notion of roleplaying which seems to have evolved into what can best be described as "fantasy superheroes," Courtney and I dispatch the modern notion of character "builds" straight away by declaring that character stats should be generated by rolling 3d6 for each stat in the order the appear on the sheet, just like you would have done back in 1981 to play Jean Wells original work.

Of course, you are free to ignore our rules recommendations, but we feel you will be cheating yourself and your group out of a different kind of roleplaying experience that delivers a lot more fun.

The module offered with this campaign incorporates all the material of the introductory release, and expands upon it to offer a multi-session adventure designed for 4-8 characters of levels 1-3.