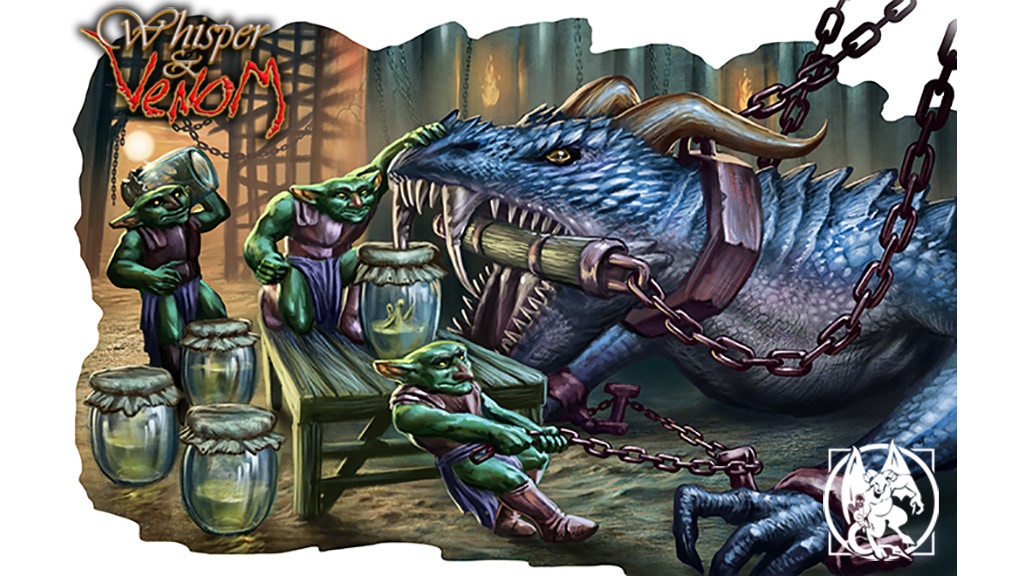 I've been a fan of Whisper & Venom since Zach Glazar first self-published it back in 2013 - holy shit, has it really been that long? Whisper & Venom has led to a strong friendship between Zach & myself, that continues to this day. Heck, we even get together for virtual racketball sessions on occasions. Just letting you know what the connections are, and any biases I may have :)

The Whisper & Venom: Dark Fantasy Adventure for 5e and OSE Kickstarter brings back the original with new art, updated layout, and is available in 5e and Old School Essentials versions. Those backing in the first 36 hours get a free gnome mini. I have mine directly from Zach at my first NTRPG. Again, has it really been that long? I guess so ;)

Those first 36 hours also get you a discounted price ($47 - plus shipping, of course - compared to the regular price of $50).

I'm in for an OSE version. Lets get 200 backers for the OSE version and unlock the higher quality printed book (instead of merely a POD).

Whisper & Venom, the acclaimed adventure setting, is being resurrected and expanded for Fifth Edition and Old-School Essentials. Originally released in 2013 by Necromancer Games’ very own Zach Glazar under his publishing venture Lesser Gnome, Whisper & Venom’s success was a surprise to everybody, especially its author. After many years of disingenuous promises, Whisper & Venom is here, and it is bigger, better, and more beautiful than ever. No, really it is!

It will be a full-color, hardcover book written for Old-School Essentials by Necrotic Gnome or the ever-popular Fifth Edition system. In addition, many of the options from the 2013 project will be available as add-ons, including the 28mm miniatures featuring a selection of notorious adversaries and hapless NPCs that appear inside the adventure. This new batch of 28mm miniatures will be cast from the original masters by Valiant Enterprises.

Whisper & Venom was written by Zach Glazar and John Hammerle as a tribute to the fantasy adventures and roleplaying game accessories of the 1980s. Following its release, Whisper & Venom proved to be a well-received title that was played and discussed more often than anyone, especially its author, expected.

It is now being released by Necromancer Games, which brings the experience, resources, and talent to the project to make Whisper & Venom even more special. A combined total of 80 years of publishing experience will allow for art, editing, and design resources that are an order of magnitude bigger and better than what was possible when it was first released.

Whisper & Venom is a regional setting and multi-part adventure set in the Whisper Vale, an isolated community of insular villagers beset by an outside supernatural force that sow's distrust and paranoia. Undue stress has induced social hardships and pushed their community to the point of breakdown. As they blame each other, the actual source of their misery remains camouflaged.