Kickstarter - Elements of Inspiration - Bring Your World To Life! (Cards for Gaming Inspiration) 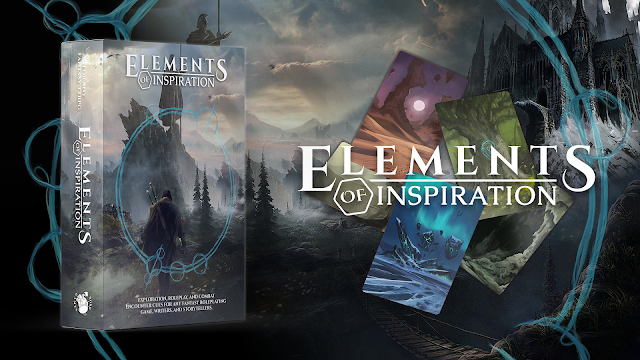 Let's see. I've known the principle behind Nord Games for a number of years and we've been known to talk at gaming conventions - when I was going to such. As for the Nord Games Community Manager, I've known Ben "The Best Hair in the OSR" for a number of years, when he could have rightfully been called a kid to now, all grown up, and I consider him a friend, even if he does critique my drinking red wine with ice.

Nord Games has a history of putting out good and most importantly, useable products with their Kickstarters, and Elements of Inspiration appears to raise even that high bar.

As an improv style DM, resources like the decks in Elements of Inspiration are my bread and butter. I'm in for $50, for the print plus PDF.

As I type this, the Elements of Inspiration Kickstarter has funded and then some - over $84k from a $20k goal.

Set off for adventure with Elements Of Inspiration! The most expansive, detailed, and dynamic tool for fantasy roleplaying games and storytelling we've ever created. This 420-card box set contains 9 decks, each for a different environment. So no matter where the heroes go, there will be exciting events to experience.

Decks within the Elements Of Inspiration Box Set are based on common and exotic environments found in fantasy adventures including: Urban, Forest, Mountains, Underground, Waterways, Tundra, Deserts, Plains, and Swamps.

We've based our card types on the three pillars of gameplay emphasized in the world's greatest roleplaying game: Exploration, Roleplay, and Combat.

Each card has a cue word and explanatory paragraph to spark your imagination. There are also four options listed that pertain to the cue word for added variety and inspiration. Finally there are three icons at the bottom of each card that present additional intrigue such as moon phase, weather conditions, and supernatural signs. Each of these card elements can be used to form a more and more detailed picture of this particular aspect of the story.