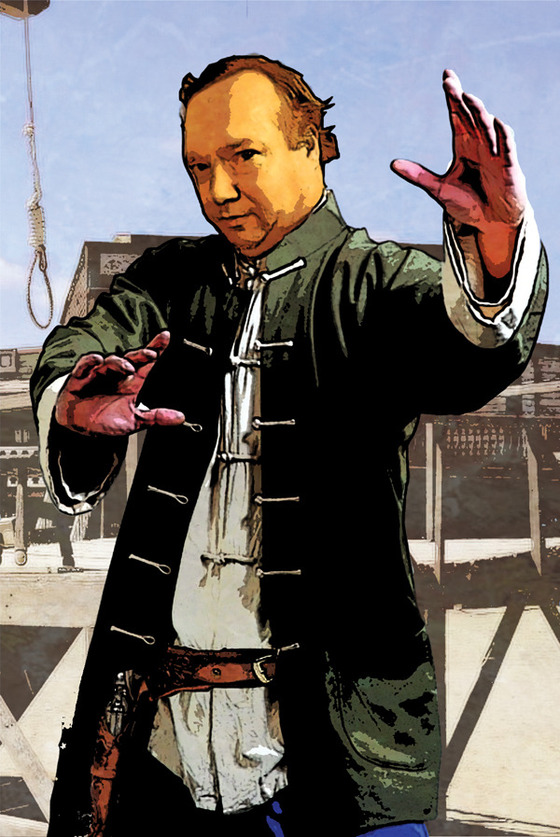 Now, it should be noted that Gareth was informed of the Far West Forums being offline from one of The Tavern's readers. Never let it be said that we don't care. I'd have notified Gareth myself via the only medium he communicates via - Twitter - but he has me blocked. Ah well.

Now, on to the update:

Several updates in this email, and we're busy as a cow’s tail in fly time, so I'll get right to it:

1) The manuscript has been handed off to Eric Trautmann (my business partner, formerly of West End Games) who is well underway on the layout, and should be done soon.

2) All additional spot illustrations requested by Eric have been delivered to him.  You can see one of them here, illustrating the "Artist" skill (in this case, a musician):

3) Once complete, we'll be delivering the PDF to you.  While layout is underway, meanwhile, I am conducting reviews of US-based printing companies, checking on prices, scheduling, and quality -- the pandemic-related supply chain issues, as you may have heard, have made overseas printing problematic.  Shipping from printers in China, for example, can take as long as 18 months or more.  So US-based it will be.  I'd rather not go the print-on-demand route, so I'm looking at offset printers -- -the costs will be higher, but, to be honest, this project is already a money-losing operation, so that's not a massive concern (but I would obviously like to keep it reasonable).

4) To that end, before physical delivery, I will be asking you all to email me directly with your present address.  Obviously, since this project has taken so long, there will be many of you who have changed your residence.  I will make an announcement of when I need that info.

5) We have been the victim of some malicious bastards who decided to mess around with our websites -- last week, backer John Fiala notified me that the forum on the FAR WEST website was spitting back fatal errors.  I hadn't touched anything on the site in over a month.  When digging, I discovered that somehow, the entire database for the forum had been removed.

Today, I discovered that the Adamant Entertainment website had been vandalized.  Somehow, somebody had managed to gain access to the admin account.  Luckily, I had a "back door" account set up (in the event that I ever forgot my login info, etc.) -- so I used it to gain access to the site and I deleted the offending account before it could do more damage.  UN-luckily, that account was the genuine admin account, so literally every post and page created by the account was deleted as well.  POOF.  The entire site is now empty.

I have changed all of our login info, passwords, etc., on every site, and increased our security.  The amount of work that is currently staring me in the face is formidable -- so much so that I'm considering just starting from scratch on the Adamant site, and foregoing a forum entirely on the FAR WEST site (in favor of a dedicated Discord channel).  We'll see.

I know that the ridiculous amount of time this project has taken has made me some enemies out there, but still -- this has really been a gut-punch.

Anyway -- that's it for today.  Back to work.  I hope that you and yours are staying safe and healthy in these most peculiar times.

Before this fiasco known as Far West, I used to be a supporter of Adamant Entertainment. I literally couldn't give two fucks about Gareth politics, as he put out a crapton of good product. At some point, that morphed into producing no product and spewing politics non-stop on Twitter. It seems, for some, social media literally is a curse.