My Christmas in July Picks Part I post can be found at this link.

Planescape Campaign Setting (2e) - Sigil - The City of Doors. There is so much I liked about this setting. My players, however, preferred Dark Sun.

Discover the multiverse! Enter infinite universes of infinite variety, worlds beyond the prime-material settings of the AD&D game. Explore Sigil, the City of Doors, filled with portals to every layer of every plane. All you need is the right key, including. . . 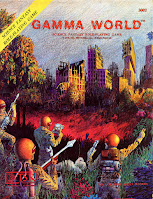 Gamma World (1e) - The first RPG I bought for myself, the whole "Constitution Score equals the number of Hit Dice" caused a lot of head-scratching back in the day.
In a quest for survival and in search of a better future, the players adventure across the land, enduring hardships and encountering dangerous obstacles and mysterious foes - never knowing quite what to expect. The result is a game that can go in many directions, but which will be challenging and fascinating no matter what the outcome.
The GAMMA WORLD™ Set includes all the basics needed to set up your own "world": game booklet (packed with terrible mutants, as well as guidelines for creating additional ones of your own), a large campaign map (designed to be easily modified by individual gamemasters), and a full set of polyhedra dice. The only other things necessary are a good imagination and a spirit of adventure!
Normally 9.99, on sale in PDF for 7.49 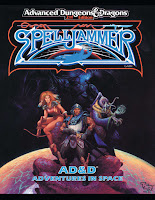 Spelljammer: Adventures in Space (2e) - Forget the City of Doors. Give me a ship that sails the skies and I'm good as rain!
Multitudes of worlds wheel through Wildspace. The crystal shells that encase them bob and drift in a turbulent, rainbow ocean which fills all the cosmos. Sturdy merchants, bold pirates, and daring explorers venture into the great, unknown vastness of the universe, seeking wealth and adventure.
The SPELLJAMMER Game puts you in command of a fantastic ship capable of spanning the tremendous distances between planets. Graceful elven flitters, stately illithid galleys, deadly beholder tyrants, and the awesome Spelljammer itself carry trade, emissaries, and heroic action throughout all the worlds of the AD&D game.
Normally 9.99, on sale in PDF for 7.49

D&D Rules Cyclopedia (Basic) - Often referred to by many as the single, best rulebook of the era, I remember houseruleing my AD&D campaign with rules taken in whole from the Rules Cyclopedia.
Whether you're a player or a Dungeon Master, the Dungeons & Dragons Rules Cyclopedia is now the comprehensive sourcebook you need for the original fantasy roleplaying game! For ages 12 and up, the Cyclopedia contains the compete game system and hundreds of features, including the following:
Normally 9.99, on sale in PDF for 7.49 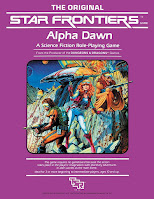 Star Frontiers: Alpha Dawn - I bought this game for my sister to play, so in the end it became mine ;)
Alpha Dawn... stage one of the Star FrontiersTM science fiction game system.
A great way to enter the world of science fiction role playing.
These Basic Rules teach you how to create characters, move and fight on the game map, and how to create adventures of your own. The included adventure, Crash on Volturnus, is simple enough for both beginning players and referees.
Stage two... expanded rules and much more!
Picture the world-famous Dungeons & Dragons game. Now imagine this same excitement in a science fiction setting. You'll find our Expanded Rules add that kind of challenge, detail, and opportunity for victory.
Everything you need: This set includes the Basic Rule Book, the Expanded Rule Book, the Crash on Volturnus Adventure Module, printable full-color map, printable counters.
Normally 9.99, on sale in PDF for 7.49 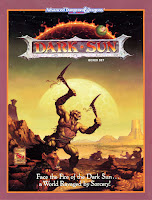 Dark Sun Boxed Set (2e) - A great dark setting for D&D. I don't think WotC could do it justice in today's environment.
Amid the barren wastelands of Athas lie the scattered city-states, each in the grip of its own, tyrannical sorcerer-king. Protecting their own positions with dark magic, they demand absolute obedience. The restless mobs are placated with bread and circuses --the arenas overflow with spectators seeking release from their harsh lives.
The land outside the cities belong to no one. Savage elves race across the deserts while insectoid Thri-Kreen satisfy their taste for blood. Dwarves labor at projects beyond the scope of men, and feral halflings lie in ambush.
Athas is a land of deadly magic and powerful psionics that offers promise of glory or even of survival. Those who do not have the cunning to face life on Athas will surely perish - leaving nothing but bones bleached white under the blistering rays of the DARK SUN
On the sands of Athas you'll face:
Normally 9.99, on sale in PDF for 7.49
The Tavern is supported by readers like you. The easiest way to support The Tavern is to shop via our affiliate links. DTRPG, Amazon, and Humble Bundle are affiliate programs that support The Tavern.  You can catch the daily Tavern Chat podcast on Anchor, YouTube,  or wherever you listen to your podcast collection. - Tenkar
Posted by Tenkar at 3:19 PM