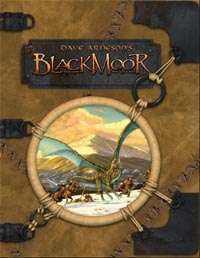 Sometimes there are RPG releases that are timeless, and that the system or edition that are written for or presented with is irrelevant. Dave Arneson's Blackmoor Core Campaign Book is one of those releases.

Released back in 2005, and uploaded to DTRPG back in 2007, Dave Arneson's Blackmoor Core Campaign Book is a snapshot look at the earliest (as far as I know) D&D setting but presented in a more modern format with a decent layout and art and a sweet looking full-color map,

I actually own this in print, somewhere in my collection, and already had purchased the PDF, and now I want to snuggle down with Blackmoor on my iPad and relive some of the magic.

Until tomorrow morning, Dave Arneson's Blackmoor Core Campaign Book is on sale for 3 bucks (down from its usual 7.50, which is still a steal if you ask me).

Over 30 years ago, Dave Arneson created the world that spawned a generation of role playing fans! This core campaign setting is 240 pages and features a full color pull out map of Blackmoor! Features Newly Revised and additional materials from the previous hardback edition!', ' The First Fantasy Campaign. Thirty years ago, the world''s first fantasy campaign began. Now it''s back! Enter Dave Arneson''s Blackmoor, a brooding world of dragons, dungeons, and danger. After thirty years of development, Blackmoor is ready for your adventures.

Note, the Original D&D version of Blackmoor is 4.99 in PDF.

Email ThisBlogThis!Share to TwitterShare to FacebookShare to Pinterest
Labels: blackmoor, deal of the day