Seeing How the Chili is Made: Call of Cthulu 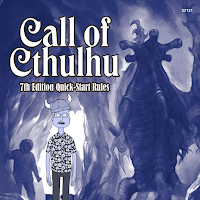 This week I have a special project coming up and I'm finally getting a chance to essentially see "how the chili is made" with regards to a game I've deliberately put off learning to play....well, actually more like the rules themselves: Call of Cthulu (CoC).

I know there are multiple versions of CoC and I have played in a couple of them a couple of times at conventions. The thing is I have, until now, deliberately avoided learning the game itself. I know nothing about the mechanics aside from that your character can go insane.

Seriously, I cannot tell you about how the stats go or if there is a skill system even. I played one traditional RPG/Fantasy setting that I barely remember (aside from thoroughly enjoying it) and one Viking era game that was equally awesome. I played my character straight, disbelieving everything and towards the end as we're fleeing some monstrous horror, actually I was following my leader who was going insane. Our escape is blocked by some other monstrous horror who offers us an escape if I allow my character to be devoured. I remember telling the GM (are they even called GMs?) something along the lines of "Since this blobby thing isn't real, sure it can eat me." Instant death, but since my leader was able to escape and it was my PC's only goal/function to protect this liege....still a win.

Now I can be 110% wrong, but I think part of my enjoyment of CoC comes from the fact that there is a mystery element to CoC and me not knowing how anything works adds a bit to the immersion. If/when my PC starts going insane, I have no clue how bad this is, how bad it can become, and how to mitigate, in game, the effects. It is kind of a mystery within a mystery.

I was reading one of my older blog posts (on my main personal blog....and no I wasn't planning on linking it) that was about some potential meta-gaming with regards to dealing with HackMaster's treatment of zombie attacks. Now in that campaign there was a lot of in-game character observations that mirrored what could be meta-gaming, and that painful in-character observations were passed along as party knowledge. This happened to the extent that unrelated PCs were simply following along with party Standard Operating Procedures (SOPs) that were due to what was dubbed "The Zombie Campaign". Of course, this only applies to that one party/my PCs in that party, and not my other games.

Now I like to think I don't meta-game and I'm sure to some extent I can play "straight" when at a convention or visiting another gaming group (it's been known to happen), but I'm sure that the reality is somewhere less than 100% compliance to what I like to think. Of course when it comes to games like CoC, ignorance of the rules pretty much ensures that I can't "game the system"....pun intended?

It's been years since I last played CoC and since I don't go to so many conventions anymore I highly doubt that I'll get to play again in the foreseeable future, and even if I do it probably won't be the same version of the game, so I should be safe.

Posted by Christopher Stogdill at 12:27 PM

Email ThisBlogThis!Share to TwitterShare to FacebookShare to Pinterest
Labels: call of cthulhu, not Erik, rules