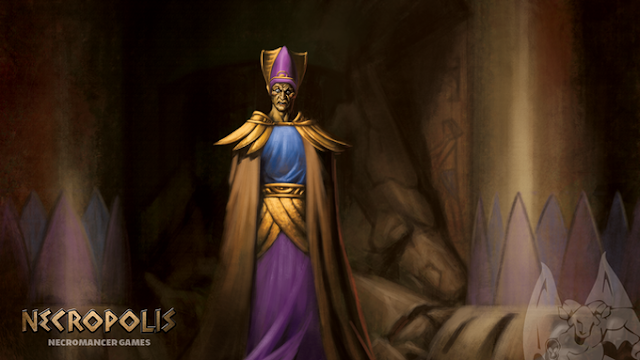 The legendary adventure updated and rewritten for 5e and S&W! An ancient evil has reawakened in the Necropolis...

Necropolis is an interesting IP. The original version was written by Gary Gygax, using the D20 license and the 3x OGL, and was NOT owned by the Gygax Estate upon Gary's death.

The current version being kickstarted, Necropolis: An Epic Adventure in the Desert Sands is a rewrite of the original, updated, and expanded for Swords & Wizardry and 5e.

Based on the original work by the grandmaster himself, Gary Gygax, Necropolis is an epic desert adventure series for 5e D&D and Swords & Wizardry. Previously published by Necromancer Games as a d20 system adventure, it has been entirely updated and revised by Mark Greenberg, co-author of The World of the Lost Lands by Frog God Games. (D&D is a trademark of Wizards of the Coast; Necromancer Games and Frog God Games are not affiliated with Wizards of the Coast or the Gygax estate.)

This grand adventure is set in the Triple Kingdom of Khemit, on the continent of Libynos in the Lost Lands, the world of Frog God Games and Necromancer Games. Necropolis is designed for a party of 6–8 seasoned characters starting between 7th and 9th level and will challenge even the most experienced players.

The book you will receive includes a multiple-stage adventure taking the party from an oasis village to the depths of a long-lost tomb, together with a wealth of other material that can be used to expand a campaign into this desert land, including:

Altogether, there is enough material for dozens of hours of play over weeks or even months of game sessions.

I'm in at 55 bucks, print plus PDF, including maps and stretch goals. As I type this, Necropolis has passed 53k in funding, of a 15k goal, with 28 days to go.

Overseas backers can back for a POD version of the book to save on international shipping costs.