Dissing the Call of Cthulu Quick Start Rules.....for a Purpose 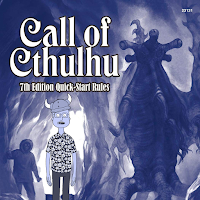 Today the podcast I helped with dropped, and while I'm not above self-promotion, the reason for mentioning it is the fact that I was clearly NOT a fan of the Call of Cthulu Quick-Start rules....

.....like holy fuck I would NOT want to play the game after reading these rules.

"Gee Chris, what's your beef with the game*?"

Now I did take copious notes while I was reading, and re-reading the Quick-Start rules. While I have the notes, I'm not even going to glance at them. Since it's been a week now I'd like to *just* go off of my memory because some, well maybe some, of the small nit-picky stuff would be forgotten and the problems that remained with me a week later might be something that could be addressed....

......not that I expect Chaosium to read the Tavern, much less take my advice (but if they do my standard consulting fee is $50/hr with a 2 hour minimum), BUT.....I know sometimes uber fans try (and in my opinion fail) to put together their own "Quick-Start" rules. If anyone can learn from my observations/pain, than great....this post will be worthwhile.

First off, I really think ANYONE trying to put together any sort of RPG guide needs to sit-down and literally (as in write it out) determine what their focus/audience is. Making a guide for experienced RPG players vs. completely new players is fricken huge! This Call of Cthulu Quick-Start (CoCQS) said it was for total RPG newbs, but it clearly was not. There were references to advanced rules not even mentioned in the guide....and by not mentioned I don't even mean in passing. If I wasn't already a gamer I might not even have noticed that the references were to "advanced" rules.

On the flip side though, to advanced rules, is to realize what rules you're going to include and actually use them! After reading the CoCQS and then the included adventure it seemed apparent there was some sort of base-line for essentially untrained skills....but there wasn't a single mention that skills had a base level, just if you "got" the skills then you used  certain numbers as a base you added a percentage to. For what seemed like a skills-heavy game, not actually expressing how your skills work is a cardinal sin.

So we had rules included/referenced that shouldn't be, and basic skills missing......we also had basic aspects of the game that technically were represented in the adventure, but easily skipped. I think it would have been difficult to go through the adventure and not use the Sanity mechanic, but Luck.....Luck could easily have been missed when playing through the included adventure.

When you started out the adventure the players are given an either/or direction for where to proceed, when it is really obvious to an experienced player that there were more than the two options.....not terrible in and of itself, but since the CoCQS was aimed at not only inexperienced players, but a brand new Keeper (GM).......not cool.

...also not cool were including things that had no value to the game. There was a spell mentioned and even a handout that were straight-up throw-aways as they were never shown or mentioned again. Now after talking to the other guest hosts evidently there are some follow-on adventures that can utilize these elements. Nothing wrong with that per se, BUT even a simple included statement letting this new Keeper know that these elements tie into a larger thing would be useful.

Speaking of useful, or really not useful in this case, were the included handouts for the adventure. Ugh, talk about a missed opportunity. These handouts were basically just a typed up summation of "boxed text" the Keeper would have read out. No added value......which leads me into a larger point.

The whole idea of the CoCQS is to give a taste of the game rules with a short adventure. Hopefully this would entice people to I don't know.....actually want to play the game! It was clear that the product I downloaded from the Chaosium website was an actually printed product....and printed product costs money, BUT download product....not so much. Simply dumping what was a full-color (even if the color was black & white) press product into a PDF and calling it good was a missed opportunity. They could've easily reformatted the contents to look nicer for at-home B&W or even color printing and those handouts.....they could have made "real" handouts. If a handout was a newspaper clipping, then make a freakin handout that looks like a newspaper clipping! Chaosium could have, relatively cheaply, made a full CoCQS "packet" that would have had a ton of impact and really drew in some new players.

As it stands the CoCQS was a confusing mess of rules and an adventure that did not accurately reflect the rules trying to be taught.

Thing is, and this might seem painfully obvious, a metric shit-ton of potential difficulty could be involved by simply involving people that are your desired audience. If you wish to market your Quick-Start to complete RPG newbs, get some RPG newbs involved in at least the editing and playtesting elements. Some of the problems I noted were most likely created because the writer was overly familiar with the rules to begin with.

Posted by Christopher Stogdill at 7:52 PM

Email ThisBlogThis!Share to TwitterShare to FacebookShare to Pinterest
Labels: call of cthulhu, not Erik, rules