Got Some Unexpected Help Figuring Some Stuff Out 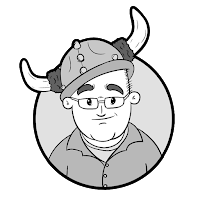 We're pretty much all dorks/geeks/nerds here at the Tavern (except for Rach...she's an angel...[I got your back Erik!]).....and I'm willing to bet that most of us goofs like more than just RPGs.

Now I don't consider myself a Star Wars geek, but I do enjoy the films....for the most part. I really didn't care for the last trilogy we got and at the point of coming across as sexist (too late... I opened my mouth so therefor I am wrong) I really didn't care for the character of Rey. My problem though, was I could not tell you why I didn't like Rey, I just didn't. Now I really try not to be some pseudointellectual type and me trying to get up in my head as to why or why not I don't like something really isn't going to work unless I can point to something concrete and obvious......or I have it pointed out to me.

Now the title alone would normally dissuade me from watching the video, but it came up automagically in my cue 'cause I watched something about "Charismatic Intelligence" with Hollywood types and this rotated in. I won't go into the finer details here but the author/narrator's words hit home because she was able to point out something really obvious, but beyond my grasp to understand without the help.

Now since my mind wanders like no other I started to wonder if there was such a thing as "womansplaining" since I had to have a woman point out the painfully obvious to my clueless self. There is, it's called "femsplaining" and this video was so not it.

No this video was just a good explanation on a few things I couldn't wrap my head around because.....I hadn't tried?......I lack the sufficient mental capacity?......I didn't care to explore the concept further?

Most likely the latter because if you don't like something, why spend more energy trying to figure out why? It's either obvious, or it's not and knowing either way doesn't matter if you don't want to spend more resources (time & energy) on it.

Now there have been some RPG games I haven't liked, but usually it's quite obvious to me. The rules are too crunchy/fiddly for my tastes (Rolemaster) or I don't care for the amount of effort it takes to make a PC (D&D 3.5). Doesn't mean I won't play those games, but I'd rather play something else if given the opportunity.

There was a time when HackMaster was becoming a game I didn't enjoy playing, but I had no clue as to why and again I was fortunate to have another woman point out the painfully obvious to my clueless-ass self. Back when HackMaster 4th edition was waning, but 5th Edition wasn't available yet there was the "secret" 5th Edition playtesting. Now the majority of the D(evelopment) Team at KenzerCo are engineers and while they're all great guys......but holy hell can they over-engineer a RPG....and this is coming from a guy who likes a fair amount of RPG Crunch.

HackMaster 5th Edition is heavily skills based and the design of the skill system was basically that skills started at 100 and went down as they improved. You rolled a % and wanted to get over your skill number. High was always good and adding bonuses to your die roll was literally adding a number to your die roll. Sounds good right? I think there are several systems out there that use a similar mechanic.

Nope......did not like it. Honestly I don't think anyone outside of the D-Team liked this skill system, but for the life of me I could not figure out why I didn't like it. Then Shabby, a fellow friend/gamer/playtester pointed out the painfully obvious: If you have a 90% in a skill, that percentage is your chance of failure, not success.

The playtesters managed, probably with a HUGE amount of convincing by Shabby, to "fix" the skill system in HackMaster 5th edition to the point where I'm a fan again. While I know now this wasn't "womansplaining" I'm personally glad to have been helped out on these two occasions to figure out that I like character development and positivity in my gaming systems......

.....now if I could only get some help with some other shit I can't figure out.....but that would also require me to care more than I do. Life's too short to dwell on media and games you don't like......

Posted by Christopher Stogdill at 1:01 AM