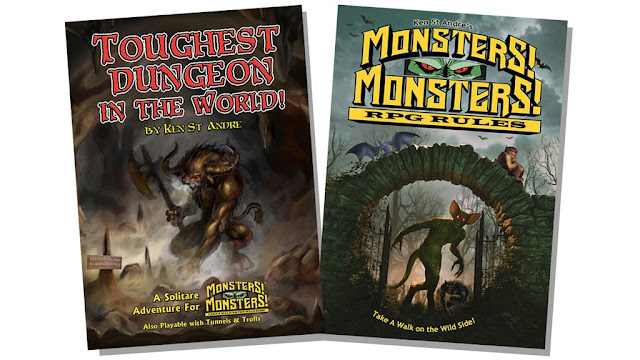 For those that somehow don't already know this, I'm a huge Tunnels & Trolls fan. I own original copies of the Tunnels & Trolls 2nd print (Ken's play copy), 4th print, multiple versions of 5e and 5.5e. the tin and cardboard boxes from Fiery Dragon and of course T&T Deluxe. I own first prints of most of the original T&T adventures. Yes, I really enjoy me some T&T.

So it is safe to say I am am excited to see the Monsters! Monsters rpg & "Toughest Dungeon in the World" solo Kickstarter go live and at VERY reasonable backer levels. Both books in PDF for 8 bucks or both books in Print -and shipping free in the US with PDFs for 29 bucks. 37 bucks if you want both books signed by Ken St Andre and Steve Crompton (there are levels between for one book or the other, but trust me, you'll want both). Tell me I don't want the signed leather copy. Sigh. Rach will kill me ;)


In 1976 Ken St Andre, the creator of the 2nd oldest role-playing game, Tunnels & Trolls created a companion game to T&T, called Monsters Monsters! It was first published by Metagaming Concepts and then again by Flying Buffalo in 1979. The game remained unchanged from then until now...

It's 2020 - Ken St. Andre has worked since the 1970's to make games that are better for the players; for example, the Origins  award-winning Stormbringer for Chaosuim, and Computer Hall of Fame Wasteland for Electronic Arts/Interplay. (It was the first post-apocalyptic rpg.) Plus Deluxe Tunnels & Trolls for Flying Buffalo. Now he  has updated and created a new edition of Monsters! Monsters! that retains much of its original appeal and structure, but with all new art and new options like stunting and monster chaos factor.

The new M! M! rules also lists 38 monster kindreds you can play, gives you their dice modifiers and now each monster has a special power unique to its kindred. Each monster is described in a separate section. Its also better organized and easier to use. (For example - now the monsters are separated into humanoid and non-humanoid types)  There are two character sheets you can use along with specialized charts that allow you to roll up  various types of Monsters based on many common frpg environments.  And before this Kickstarter is over, we may have some other exciting surprises to add to the book if we reach some of our stretch goals...

In 1980 Judges Guild published "The Toughest Dungeon in the World" a solitaire adventure that was meant to be played with Monsters! Monsters! or Tunnels & Trolls. Since then several new editions of T&T have come out and Ken St Andre was inducted into the Origins Hall of Fame. Ken is one of the last standing creators of the first generation of role-playing game designers and is still working on the classic games he created.  Now, 40 years later, Ken has updated and enhanced this classic adventure and the Monsters Monsters Rules. Artists Phil Longmeier and Steve Crompton have enhanced it with new illustrations and graphics more suitable for a monster-mash solo adventure. This new edition is at least 44 pages long and will keep any player busy for a lot of adventure in caverns and tunnels deep below Trollworld. The Lord of Shadows dwells in the depths - can you avoid his power or will you be corrupted by it?  One other thing we should add is that you can play this solo with the Tunnels &Trolls rules or the Monsters! Monsters! rules, so you don't have to learn a whole new rpg to play.

Project status: Just to let you all know - these books are DONE.  The rules are written, the art is finished and the layout is complete.  We will be able to send this to the printers a few weeks after this Kickstarter is funded.  All we need to know is how many of each book to print. We also want to add the backers' who paid to have their names listed in the book our Monster Benefactor thank you section.  This Kickstarter is open to shipping anywhere in the USA.  (We will soon have an update that details how overseas fans will be able to order as well.)