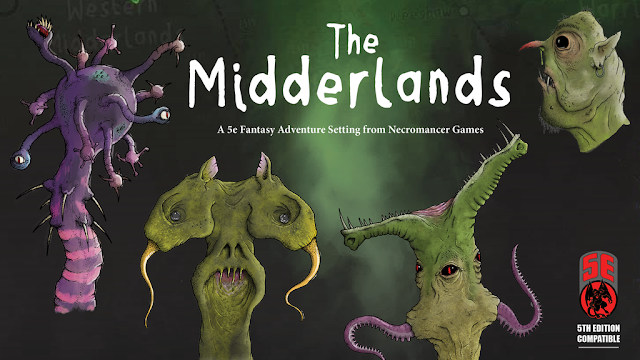 If you are a regular reader of The Tavern, you've seen me talk about the Midderlands before. It's Glynn Seal's "weird fantasy" setting and was written with the OSR in mind. This time around the Midderlands are getting the 5e treatment, and I couldn't be happier.

Fifth Edition needs a setting that breaks the mold and yet feels familiar, and the Midderlands 5e Kickstarter will do just that. There's a whole world of future Midderlands fans that will be introduced to Glynn's work through this Kickstarter and I couldn't be happier.

This Kickstarter is being run by Frog Gd Games under its Necromancer Games subsidiary label.

20 bucks for the PDF, for bucks (plus shipping) for the Print plus PDF.


The Midderlands 5e
Necromancer Games is proud to team up with Glynn Seal to bring the ENnie Award winning Swords & Wizardry weird fantasy setting, the Midderlands, to Fifth Edition. This strange and wondrous setting is edgy and twisted and will make a perfect addition for those looking for something new and challenging for their home campaigns. The Fifth Edition version comes with a ton of new art, a fresh layout, and updated maps.  It still has all the green style of the original!

Words from the Author

The Midderlands exists because of a series of fortunate thoughts.

It was mid-late 2016 and often I would go around to my partner’s house on the evenings and whilst she sat on the sofa watching the television, I doodled the heads of strange creatures in side profile.

I had no plan for these doodles, but I had a sketchbook and I wanted to fill quite a lot of it. As I doodled, I imagined that these creatures might live in the surrounding lands where I lived. That gave them much more life. I then thought I cou

ld create a book of creatures with a little about where they live and what they do.
Then I figured that rather than living in the land where I do now, why not an alternate version of where I live. It would be a bit weirder, darker, gloomier. I wanted something that made the land the way it did. That’s when Gloomium became a thing.

The locations would be inspired by the real world, but twisted and green-tinged, so I needed a map. I made an alternative version and that’s when I decided this was a game setting.

The creation of the initial setting book for old school games – the 5E version of which is being crowdfunded here – spawned another book which covered the rest of the United Kingdom, and then a further book which focused on the setting’s version of London, Great Lunden.

I have been amazed with its success and wanted to bring a version of the original to the 5E audience, so they too could enjoy wandering its twisted locales and encounter its unusual creatures. I just wasn’t sure how to achieve it.

Luckily, the kindly amphibians at Necromancer Games came to the rescue and we are now in a great position to bring a new version of the setting to you. My hands will be heavily involved in new and updated artwork and maps and a new layout.

This is going to be exciting and you won’t want to miss out.
—Glynn