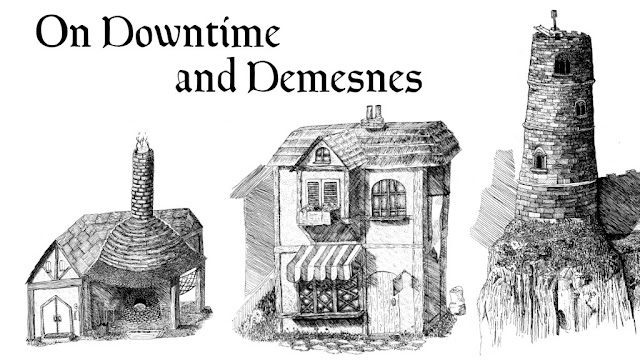 Back this Kickstarter. Now. On Downtime & Demesnes. I'll wait. If you aren't sure, back for a buck and download the art-free pre-stretch-goals book. Read it. I'll still be waiting for you as you up your pledge.

Seriously, Hack & Slash may have outdone himself with Downtime & Demesnes. It is simply that good, and you rarely hear me say that.


Do you sometimes wish you didn't have to put in so much effort into engaging your players? Wouldn't it be nice if they couldn't wait to play around in your world? If they were pushing you to spend more time in the land you create?

That's why I developed these downtime procedures over decades of play and now I can share it with you!

No longer will your players wonder what their characters should do with all their gold. It includes clear, common-sense rules for everything from starting a cult, making sacrifices to gods, to hiring mercenaries and building vehicles and castles.

Going to an arena fight? Take seconds to determine the purse, peruse mechanics to handle the arena crowd, pick some ideas for interesting arenas, and select an opponent like the Necrourge: a master of the dark arts of necrourgy, who raises the bodies of traitors or other criminals after they have been forced to fight in the arena and died.
I've got a vision of usable downtime procedures that motivate players and provide inspiration to Dungeon Masters collected in a published volume. I want one for my table. But I don't have the funds to hire a cover artist. So I'm Kickstarting this to pay Skullfungus ("I draw dungeons, their inhabitants and everything in between") to create a beautiful cover. The book is written, layout is effectively complete, and nearly all of the interior art is finished.

The downtime goals give agency to players, and let them build a dynasty. Imagine a group eager to explore your world because they have their own plans! These objective procedures give players tools that fire a desire to dive into your creative world, discover its detailed history, and make their mark on it.

It gives your players the tools to make their wildest ideas come to life, without breaking your campaign or your suspension of disbelief, all the while driving them to adventure in your world. On Downtime and Demesnes is filled with tools that work. Build a flying ship, enchant it; or build a wizards tower and raise fortifications in the surrounding lands. All with simple, scalable, rules.

This is a book used in every game you run. Your next campaign, the one after that, the one after that. . . Not one wasted word. Every page is crammed with content and creativity. No filler. Tools that let players build castles and control land, without disassociated mechanics. This is the stronghold book you've been looking for.

Back this. Back it now. Already funded and well beyond.

Email ThisBlogThis!Share to TwitterShare to FacebookShare to Pinterest
Labels: hack and slash, kickstarter