Some of the best systemless RPG supplements ever published were from the CityBooks line of releases from Flying Buffalo. As for traps, few were as entertaining as the Grimtooth's Traps Collection. 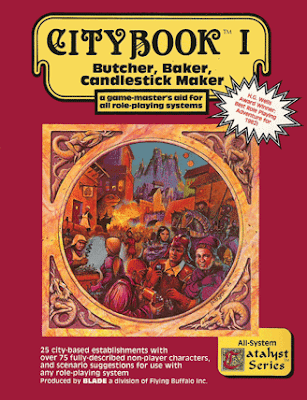 You can get CityBooks I-III, Grimtooth's Traps I and II as well as a book on unique magic items in the Catalyst Bundle of Holding for just 7.95. That is a bargain and a half.

If you step up to about 23 bucks, you add the following:


Personally, I love Mercenaries Spies & Private Eyes (just got my Kickstarter hardcover of the rules delivered yesterday). All that said, the seven CityBooks are worth the extra money on their own.

The usual 10% donation from Bundle of Holding is being given to Rick Loomis to help offset expenses related to his current cancer treatment.