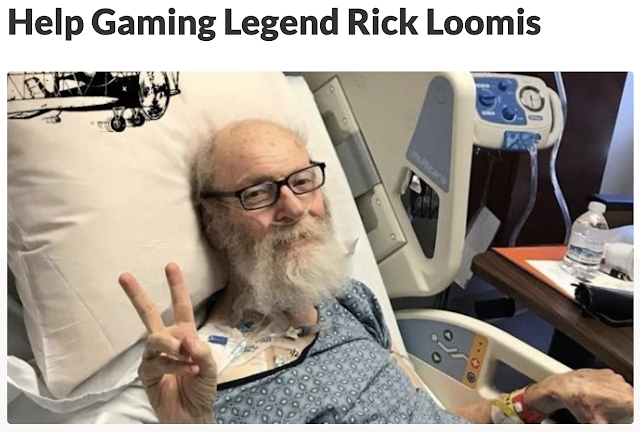 I know I've said this before, but cancer is the great equalizer. It doesn't play favorites, rich or poor, young or old, it doesn't care and you can't predict the outcome. The treatment is almost universally to poison your body and possibly irradiate it. Treatment sucks. Seriously. I know, cause I'm a survivor of Hodgkin's Lymphoma, a form of Lymphatic cancer.

To see someone else in our gaming community come down with cancer strikes home for me every time. Recently, it was Tim Kask (in remission). Currently, it is Doug Reah (NTRPG Con) and Ernie Gygax (also Hodgkin's Lymphoma).

Now, Rick Loomis of Flying Buffalo is suffering from Lymphatic Cancer. Truly, it seems like cancer is striking many of those we hold dear in the gaming community.

Rick and his family need our help. If you can donate to the fund, that is awesome. If you can't, simply share this post and hopefully, others will be able to.

The Tavern will match the first $200 raised by The Tavern's Community. Simply note your donation here as a comment or send me an email to tenkarsDOTtavern AT that gmail thing and let me know the amount you donated. When we hit $200 The Tavern will add its donation to the mix. Please DON'T stop donating when we hit $200 - Rick and his family are in great need.

From the GoFundMe page:


Rick Loomis has been an important part of the game industry for almost 50 years, and now he is in the fight of his life with cancer. Even though he is a US army veteran and qualifies for medicare, Rick's share of the medical bills are now in the tens of thousands of dollars. Please help his family through this terrible time and help keep the  legacy of Flying Buffalo going strong.

Rick was one of the founding members of the Game Manufacturing Association and served as its President several times when they needed him. He started Flying Buffalo Games back in 1970 and was one of the first people to ever run a Play-by Mail game on a dedicated computer. He has traveled the world to promote role-playing and card games and over the years Rick has befriended hundreds (thousands!) of people at conventions from his Flying Buffalo Games booth and company.  He published Tunnels & Trolls, the Nuclear War Card Game, Grimtooth's Traps and so much more. Rick truly is a legend.  But being a legend doesn't mean you are wealthy, it just means that some people have respect for your accomplishments.

Now Rick is 72, and in February he found out he has lymphatic cancer. Rick's biggest worry is not himself, but for his two sisters that live with him and the legacy of his company, Flying Buffalo.

Both his sisters (Nancy and Laura) have been trying to help Rick as best they can, but he has needed specialized medical care in a rehabilitation facility.  Rick was recently sent back to the hospital and the bills have been overwhelming. They need some help taking care of the medical bills and catching up with other expenses that Rick usually took care, of but has been unable to, due to his illness.

Rick has helped his church and the gaming industry for many years, now we are asking you to give a little help to Rick and his family during this very difficult time. Anything you can pledge will be greatly appreciated.

Maybe Rick was your camp councilor, or he  got you started in the gaming industry. Maybe he  helped you get a booth for Origins after the deadline or you played in one of his PBM games. Maybe he was just nice to you. If you feel a debt of gratitude for Rick and how he helped you or the game industry - now is the time to show your gratitude.  Help spread the word that a gaming legend and his family need some help..

If you can't afford anything - thank you for your time, your prayers and well wishes.  If you can help, we are eternally grateful for your contribution!