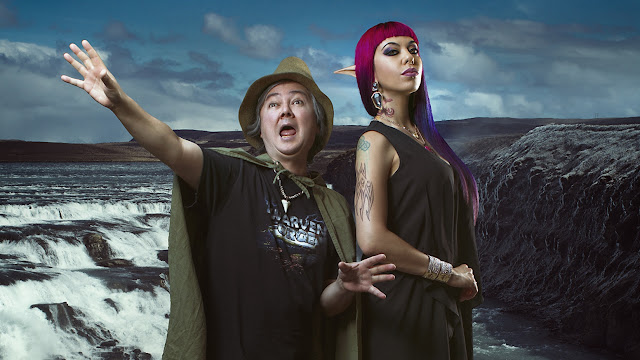 There was a lot of chatter about the Destination Fantastic Kickstarter both while it was funding and immediately after it funded - right up against the clock when it did.

Let me state something right off the bat: although the perception by many was that this was a Kickstarter being run by Stefan Pokorny & Satine Phoenix, this wasn't the case. Sure, they are the stars of the show, but the KS was run by the producer of Dwarvenaut (a documentary about Stefan and available on Netflix - well worth the time to watch if you haven't already, it's entertaining). So, this is really a critique of a Kickstarter run by Ron Harbin.

The first issue, and it's a biggie, is that there is no real sense of what the average backer is getting of value for their cash.


An astounding digital postcard of our Iceland adventures!
Plus a heartfelt thank you + EXCLUSIVE INFO UPDATES, behind-the-scenes access, videos, and more!

Yep, pretty much a whole lotta nothing. 3 bucks gives you the same without the digital postcard.

What does 15 bucks give you?

Notice it apparently lacks exclusive info updates and the rest of the goodies from the lower pledge levels. Well, probably not but shows a sloppy presentation of backer levels.

25 bucks gives you the full season, but the season only funded for 1 episode. Oh, and a Digital Storytellers Thesaurus by Troll Lord Games.

As for the rest of the backer levels, they are a mess. There are a total of 28 backer levels, which is probably 20 too many. Did I mention there was an "angel backer" right before the end of funding? It needed $100k to fund. It hit exactly $109,230. That "angel backer" jumped in for $9k right at the end. Who the fuck with $9k to drop on a KS waits until there is less than half an hour to go in the funding period?

How about that $100k funding goal? With about 48 hours left it needed about $25k. With lofty stretch goals in the millions of dollars, why did it perform so badly?

Well, aside from the poor and confusing presentation, there was the perception that backers were paying for a bunch of rich people to have fun and go on vacation, then film their fun for the non-rich people to watch.

Yep, that's a comment from an earlier post on this blog. While I don't fully agree with the perception, I certainly understand it.

Then there is the issue of funding the stretch goals themselves.

The first episode funded at $100k. So, that would seem to be your baseline breakeven cost. One assumes that also includes initial equipment purchases and the like. Also, its money already spent, as the first episode is already filmed.  Ah-ha! Now you see why the project needed to fund (KS is fund or get nothing, but I digress.)

The never-ending, far too full of explanations that I felt like my pocket was being fleeced section on Risks & Challenges states: between fees, rewards, and shipping, about 35 cents of every dollar is gone before actual projects costs. I'll accept that number.

So, if the first episode funded with $100k, and that includes initial equipment cost, that later episodes would be cheaper to produce, but you would be wrong. As the stretch goals are structured, each stretch goal episode costs between $400k and $450k to produce.

Yes, you read that right.

Here, peek for yourself. 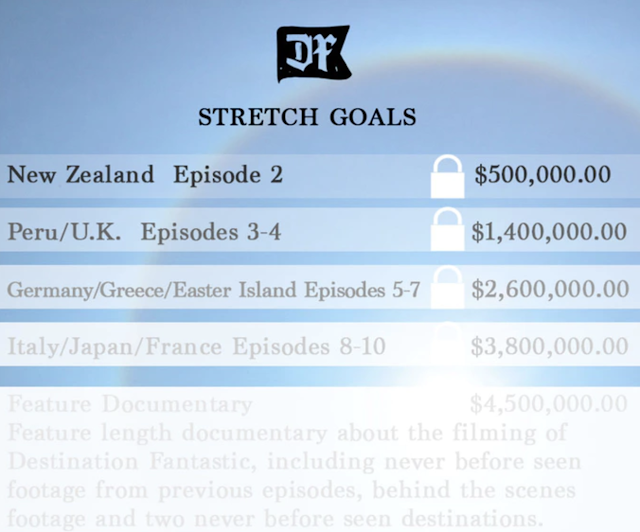 This is where I feel that Destination Fantastic "jumped the shark." Its where many potential backers who slogged through the mess of what was already shown to them started saying "cash grab" by the producer. I know that's what I thought when I sat down and finally gave this project a thorough examination.

This project should never have funded. It should have rebooted with a clearer presentation and more reasonable stretch goals. So, although technically not a "failure to fund" it probably would have been better for all if that had been the case. As it stands now, I fully expect a Destination Fantastic Episode 2 Kickstarter in a few months. Hopefully, Ron Harbin takes the time to try a different approach when he takes his second bite at the apple.

edit: I should also note that I suspect there was a thought process that due to the huge success Stefan has had with his own Dwarven Forge Kickstarters, there would be a significant carry over to Destination Fantastic.  Obviously, that is NOT the case. Somebody failed n their Marketing Skill Roll pretty badly.